Sri Lanka. An end to the war with the Tamil guerrillas seemed distant in 1996. The year began with a terrible blast attack in central Colombo. At least 80 people were killed and more than 1,400 injured when a truck full of explosives drove straight into the central bank’s headquarters on January 31. Authorities accused the guerrilla Tamil Eelam’s Liberation Tigers of Tamil Eelam (LTTE) for the act. In December 1995, the army had driven out the LTTE from its headquarters in Jaffna in the north. The army’s continuing offensive against LTTE’s positions in the east harassed many casualties on both sides in January, and fighting flared up again in March. Just before the army launched a new offensive against the Jaffna Peninsula in April, President Chandrika Kumaratunga introduced a state of emergency throughout the country. The government was given the right to enforce laws without Parliament’s approval.

After a month’s offensive, the army claimed to have complete control over all of Jaffna, and the government began planning for a reconstruction of the peninsula. Then the LTTE struck an army base in Mullaitivu in the northeast and killed between 300 and 1,200 soldiers – the numbers of the army and guerrillas went very far apart, but it was arguably the army’s most difficult adversity in several years. It took the army a week to recover the base, since even the troops brought in to the rescue suffered severe losses. During the rest of the summer, the army also went on offensive against the guerrilla’s new headquarters in Kilinochchi in the northeast. New offensives were carried out during the fall, but neither side seemed able to decide the war.

The LTTE rejected the president’s invitation to new peace talks, and the government’s hope of ending the war through increased self-government for the Tamil provinces did not appear to be able to be met. The government does not have the majority in Parliament needed for the necessary constitutional change.

Former President Junius Jayawardene passed away in November, 90 years old. It was during his tenure that the Tamil war began, and he was considered to carry a great debt to it.

Sri Lanka’s climate is tropical with varying levels of precipitation, due to the monsoons. Due to its location between the 5th and 10th degrees of northern latitude, the country has a warm climate with mild sea breezes and high humidity. Average temperatures range from 16 ° C in Nuwara Eliya in the central highlands (where there can even be snow and frost in winter) to 32 ° C in Trincomalee on the northeast coast of the country. The average annual temperature for the entire country is between 28 ° C to 30 ° C. The coldest month is January and May is the warmest.

While the south-west of the country (see Colombo climate diagram) is always humid with two clear precipitation maxima in May and October, the south-west monsoon on the north-east and east coast brings only little rainfall, as this area is located in the lee of the central mountains. Most of the precipitation falls there during the northeast monsoon in November and December (see Trincomalee climate diagram). The precipitation pattern is influenced by the monsoon winds from the Indian Ocean and the Bay of Bengal and is determined by four seasons.

In the first season from mid-May to October, southwest winds bring moisture from the Indian Ocean. When these winds hit the central highlands, heavy rain showers occur on the mountains and in the south-west of the country. The east and northeast of the island get little rain during this time.

In the second season from October to November, periodic gusts of wind and sometimes cyclones occur, which bring cloudy weather to the island. In the third season, from December to March, the northeast monsoon brings moisture from the Bay of Bengal to the north and northeast of the country.

The last season from March to mid-May brings little rainfall. 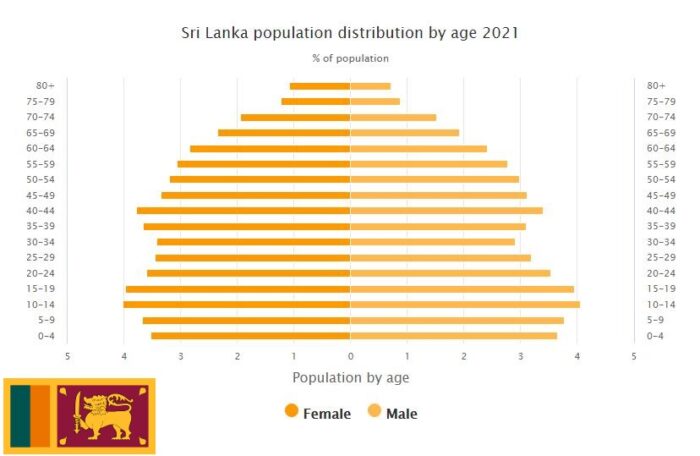