Spain. The parliamentary elections in early March became a victory for the Conservative Partido Popular (PP), which won 156 of the 350 seats in the second parliament of the Spanish Parliament, Cortes. This meant that for 13 years the ruling Socialist Party (PSOE) ended up in opposition. To be elected prime minister, PP leader José María Aznar formed a coalition with the Catalan Convergencía in Union (CiU) and two other smaller parties.

As one of his government’s most important tasks, Aznar looked to reduce the country’s budget deficit. In order to meet the EU convergence criteria for entry into EMU, the deficit until 1997 would have to be reduced by an amount corresponding to 3% of the gross domestic product.

The Aznar government received a six-month honeymoon, but then the relative calm ceased. On the one hand, the Basque country and Catalonia wanted control over tax revenues in their regions, and on the other, workers and officials objected to the far-reaching savings in the state budget. In December, 1.6 million civil servants took part in a one-day strike in protest of the government’s decision to freeze their salaries at the 1996 level.

In December, Spain became a full member of NATO. At the same time, the Spanish Parliament decided that no nuclear weapons should be placed in Spain.

In December it was celebrated that 60 years have passed since the international brigades arrived in Spain to take part in the battles against Franco’s phalanxists. At the same time, the German government decided to pay a sum equivalent to SEK 13 million. to the residents of the Basque city of Guernica as compensation for the German terrorist bombings against the city in April 1937.

The so-called Second Republic was created in a situation characterized by serious political and economic difficulties that were difficult to solve. First, a radical Republican and Socialist government implemented a number of profound changes to the Constitution. Significant parts of the big estates were confiscated and the church’s power over finances and education was reduced. Following a Catholic and conservative election victory in 1933, “two black years” followed, where many of the Republican reforms were reversed. Under this government, therefore, a series of uprisings and strikes were launched, leading to the dissolution of the National Assembly and re-election on February 16, 1936. This election was won by the Popular Front, which consisted of Socialists, Republicans, Communists and with the support of the anarchists.who had otherwise boycotted the previous elections. Immediately after the election victory, the army, the church and central sectors of Spanish citizenship began to work to bring down the government – which was weakened by internal contradictions -. On July 18, 1936, an important part of the army led by General Francisco Franco revolted against the Republic. It was the start of the 3 year civil war. The Republican government hoped for support from European democracies, but came to wait in vain. They stated in favor of non-interference in the conflict. The Soviet Union was the only country to provide material support to the government of the republic, and at the same time a large number of volunteers from Europe and America joined the republic in the struggle.

Internal contradictions in the Republican forces as well as the superiority of arms and organization among Franco’s forces – supported by Germany and Italy – were crucial to the fascist victory in March 1939. At the end of the Civil War, Franco appointed himself head of the new Spanish state. The authoritarian regime created and led by the caudillo Franco derived features from German and Italian fascism. To show that class struggles and strife between the parties were now over and that workers and factory owners – high and low – were cooperating in national and social harmony, created controlled verticals.unions where both employees and employers participated. Instead of parties, a “national movement” was created, which was a merger of the various parties and groups that had supported Franco – among other things. the original fascists, the phalangists. Instead of a people-elected parliament, Franco set up a corporate assembly with representatives from the Movement, the business community and the families.

Although some of the clearest fascist features and symbols were weakened or removed after the fall of Hitler and Mussolini, the very basic structure existed right up to 1977: banning political parties and independent trade unions, and brutal repression of all opposition. To keep the community in this iron grip, the authorities had a large political intelligence, an armed police force and the semi-military Guardia Civil responsible for peace and order in the countryside.

The economy of Frankism

After the Civil War, the Spanish economy was in ruins. The reconstruction was to take place according to a fascist pattern – a reaction against liberal capitalism and materialistic Marxism. It was a national self-sufficiency policy that entailed a strict protectionism. But despite the limited foreign investment, it was not an anti-capitalist policy. In addition to participating in basic industries, the new national industrial institute, INI, should also facilitate the business environment,

Self-sufficiency policy did not solve Spain’s problems, and through the 1950s the country experienced an economic crisis with a strong trade deficit and rapidly rising inflation. In 1957 an economic change in price began. The power of the Falangists in government was reduced in favor of Opus Dei – a Catholic organization with members from the administration and business. Although authoritarian in the political sphere, they were responsible for the development of a liberalist economy.

The two ministers Opus Dei was in the new government laid the groundwork for a policy that really caught on with the stabilization plan in 1959. OEEC – later OECD – and especially the United States gave large loans and donations while Spain had to fulfill certain conditions: The most important were easing restrictions on imports and foreign investment.

The years that followed were characterized by rapid industrial and economic development and increased trade abroad – “the Spanish wonder”. An increasing proportion of the population began to work in the industrial and service industries, while the agricultural population became smaller. There was a massive escape from the countryside. Not just against the Spanish cities, but because of the unemployment also against the industrial areas of the rest of Western Europe – including Denmark. At the same time, an invasion of foreign tourists took place, which, together with the currency sent by the emigrants, saved the deficit on Spain’s trade balance. Foreign investment was concentrated mainly in the advanced technological, pharmaceutical, automotive and banking sectors. 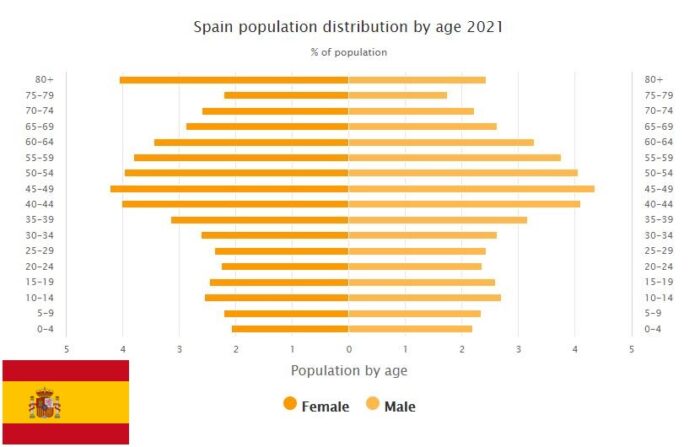