In the partyless general elections in March, as expected President Omar al-Bashir was re-elected. The country’s real backdrop leader, Islamist Hasan at-Turabi, was given a formal political position for the first time when he was elected President of the new parliament. Former Prime Minister As-Sadiq al-Mahdi, overthrown by al-Bashir in 1989, succeeded in December in escaping to Eritrea, where he joined the other volatile opposition.

Despite allegations of electoral fraud, Nimeiry was re-elected for the third time in 1983. In June of that year, the government divided the provinces of the South into smaller regional units, without consulting local leaders. It immediately triggered reactions of discontent in the affected region. Without prior notice, Nimeiry introduced Islamic law (Sharia) throughout the country in September. Nimeiry had succumbed to pressure from Saudi Arabia to get financial aid. The move immediately sparked widespread protests from animists and Christians in the south, prompting the civil war to flare up again.

A riot broke out in the city of Bhor, in which the Sudanese Peoples Liberation Movement (SPLM) emerged for the first time. This political-military organization gave the guerrilla movement in the south a new ideological foundation. The new movement set itself the goal of creating national unity and introducing socialism within the framework of respect for the autonomy of the South and religious freedom.

The SPLM military branch, the Sudanese Peoples Liberation Army (SPLA) expanded its operations to such an extent that the foreign companies conducting oil exploration in southern Sudan gradually abandoned their installations due to the war. At the same time, the Muslim Brotherhood and the opposition parties in the north stepped up their criticism of the Nimeiry regime for using Islamic law to suppress critics of the government. International finance capital also began to put pressure on the Sudanese president not to implement the Sharia to its fullest extent.

In 1985, the United States canceled its credits to the country, and the IMF forced food price increases. The rebellion now extended to the capital. In April 1985, Nimeiry traveled to the United States to request assistance but was unable to return to his country: his Defense Minister and Army General Abdul Rahman Suwar al Dahab had seized power.

The coup did not change the political situation. The Islamic bourgeoisie in the north consolidated, and in the south, the SPLM continued its activities, as the political-economic discrimination against the region remained unchanged. The political parties were dissolved and the division of the south abolished. At the same time, the government began to study the introduction of Sharia, and Dahab promised to print elections in 1986.

The election was held in April 1986 and Sadiq al-Mahdi was elected prime minister. The People’s Party (UMMA) got 99 seats in parliament. It was based on the Qur’an and the Islamic traditions.

The SPLA requested the departure of Mahdi and the formation of a transitional government, while its 12,000 partisans had surrounded the government garrisons in the south and had effectively divided Sudan in two. At the same time, hunger spread in the region because of the air-blocked guerrillas. However, it subsequently allowed aircraft with food supplies and medicines from the UN to get through to the besieged cities of Juba, Yirol and Wau. But fundamentally, the economic, political and cultural contradictions between the north and the south were unchanged, which helped to keep the conflict going.

Gross national product (GNP, per resident and year): 2379 US$

State and form of government
Transitional constitution of 2005
Republic of
Islamic law (Sharia)
Transitional parliament: National Assembly (Majlis Watani) with 426 members; Council of State (Majlis Welayat) with 2 members per federal state; Election every 5 years.
Direct election of the head of state every 5 years.
Suffrage from 17 years.

Population: Sudanese, last census 2008: 30,894,000 residents over Arab-Islamic population group, Nubian groups; Rasheida and Beja (in the east); Beggara, Fur, Zaghawa (in the west) and other

Employees by economic sector: no information

Unemployment (in% of all economically active persons)
no information 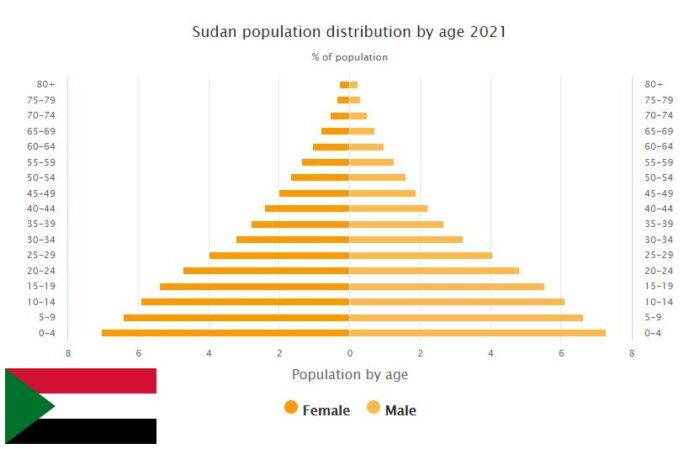