Congo. Troops loyal to former President Denis Sassou-Nguesso in July invaded the city of Mossaka in the northeastern part of the country. The government forces did not intervene to avoid carnage.

In June, the International Monetary Fund granted a $ 100 million loan to support the government’s reform program.

On November 16, 1999, a ceasefire was signed between N’Guesso and the rebels. This agreement was further extended on December 29 after mediation by Gabon’s president, Omar Bongo. In accordance with the agreement, N’Guesso released prisoners and in January 2000, thousands of rebels were disarmed. In February, Kolelas reaffirmed his recognition of N’Guesso as president.

In December 2001, 11 cases of infection with the highly dangerous Ebola virus were detected, despite extensive sanitary checks at border crossings. It is believed that an infected woman came across the border from Gabon. A total of 94 persons who had been in contact with the infected were isolated in the health system.

With an 80% turnout in February 2002, the first presidential election was held after the end of the civil war. The election was won by the incumbent president with 74.7% of the vote. This result made the second round of elections unnecessary. Although the election was conducted peacefully, it was characteristic that the main candidates of the opposition conducted their election campaign from exile, or at the last moment withdrew their candidacy claiming that the election was a pure carnival. A few days after the election, fighting broke out in the Pool area between government forces and the so-called Ninja militia. The dispute was resolved when a peace treaty was signed in March 2003 giving the militia amnesty and 2,300 rebels dropped the weapons. On August 30, Parliament voted unanimously to grant the rebels amnesty.

In 2003-04, the United Nations continued its relief programs, concentrated on the refugee camps, and the reduction of the AIDS epidemic and poverty.

Since 2000, oil production has steadily declined. That also applied to the first 6 months of 2004. The civil war of the 1990s and political chaos played an important role in this decline, as both exploration and foreign investment had stalled. Acc. World Bank data show oil production accounts for 67% of the country’s GDP, 78% of government revenue and 95% of exports. Due. the many damage to the infrastructure – bridges, roads, etc. – during the civil war, the country’s dependence on oil has grown.

In April 2005, the government reported that a group of officers arrested in January for weapons theft had been preparing for a coup. After eight years in exile, in October 2005, Kolelas returned to the Congo to attend the funeral of his wife. The former prime minister sentenced to death for war crimes was granted amnesty in November.

In January 2006, the Congo became the chair of the African Union.

The Guerilla Movement, the National Committee for Resistance, which had participated in several civil wars in 1998-2002, decided in 2006 to enter political life under the name of the Republican National Council. The leader of the new party, Frédéric Bintsangou, stated that he supported the disarmament plans throughout the country.

President Nguesso’s international reputation suffered significant damage in 2007 when a French court decided to reopen the investigation into the involvement of the Congolese government in the disappearance of 353 Congolese refugees in 1999.

Most of the opposition was boycotted by the July 2009 presidential election, so Nguesso got 78.6% of the vote and could begin his third term in the presidential post in August.

In August 2010, the country celebrated its 50th anniversary of independence from France. The president declared that the country still had a long way to go before it could fully realize the dream of independence: “Our country cannot become fully independent until our people are freed from the yoke of poverty”.

Many pygmies in Congo are living in miserable conditions, and UNICEF and human rights activities have criticized the situation for many years. On December 30, 2010, the Congolese Parliament passed a law protecting the rights of indigenous peoples. It was the first law of its kind on the continent, and marked an important step forward for Africa’s ethnic minority groups.

The July/August 2012 parliamentary elections were won by the ruling Labor Party PCT, which got 89 out of Parliament’s 139 seats – an increase of 43. The remaining 50 seats were distributed to 12 small parties and 12 independent candidates. Opposition parties and several human rights organizations pointed out that the turnout was only about 20%. 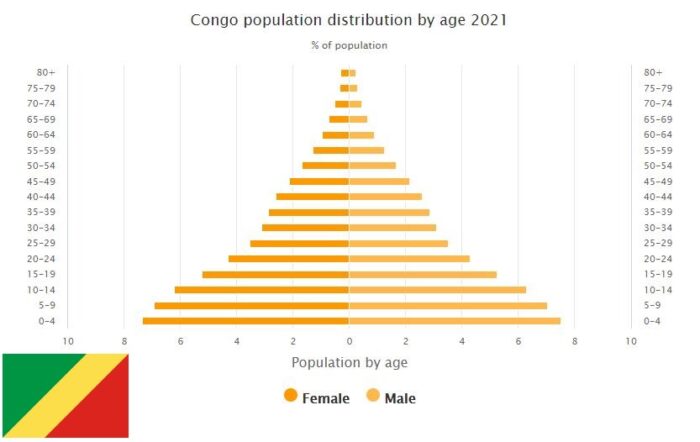