Papua New Guinea. In June, the government launched a military offensive against the separatist guerrilla Bougainville Revolutionary Army (BRA), which controlled a tenth of the mineral-rich island of Bougainville. The attack was assumed to be due to the government’s frustration that the peace talks with the guerrillas had no result. It caused strong irritation to the neighboring Solomon Islands government and was also condemned by Australia and New Zealand.

In November, former rebel leader Gernard Sinato was named “prime minister” for Bougainville. He was considered to have the conditions to end the protracted civil war that so far required about 1,000 casualties.

Two-thirds of the population is employed in subsistence farming. Meanwhile, 0.3% of the workforce is employed in the mining industry, which accounts for 66% of the country’s export earnings. The mines of Bougainville and Ok Tedi (from which gold is also extracted) have the world’s largest copper deposits. The Porgera gold mine began production in 1990, and is the world’s largest gold mine outside of South Africa. Another mine on the island of Lihir could possibly get even bigger. Mining is handled by multinational companies – some of Australian origin. Substantial oil resources have also been discovered, the exploitation of which depends on the construction of a 260-km long pipeline at a cost of $ 1 billion.

In 1989, the country forged closer ties with Southeast Asia as it signed a friendship and cooperation agreement with ASEAN and began negotiations with Malaysia. At the same time, the building was approved by a Soviet embassy in Port Moresby. In December, a marine law agreement was signed with Micronesia, which made it possible to benefit from the multilateral fisheries agreement existing between the states of the South Pacific and the United States.

In several parts of the country, violent clashes between government forces and the rural population came through 1991 and 92, which opposed the expansion of mining because of its negative impact on agriculture and the environment. The government therefore launched an economic boycott of the island of Bougainville and escalated the repression of separatist groups. The head of the separatist Bougainville Revolutionary Army, Francis Ona, declared the island independent and sought recognition from the rest of the world. The government responded by putting in the military.

In light of the increasingly violent situation that had already cost 1,500 lives, the government in August 1991 decided to reinstate the death penalty – 34 years after its abolition. This move was denounced by a large number of social movements. The Women’s National Council believed that the reintroduction of the death penalty could lead to the reintroduction of the old principle of “compensation” by murder – an eye-for-eye, tooth-for-tooth principle in traditional Papuan culture. 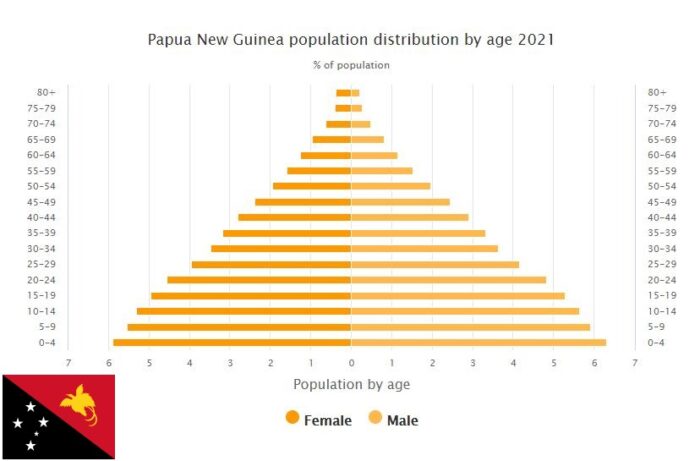 After years of intense and steady growth, the population of Papua New Guinea was estimated to be around 4 in 1998. 600. 000 residents and population growth is still at very high levels. The country, however, with an extension equal to about one and a half times the size of Italy and a territory covered for over 90 % by forests, has a very low average density (10 residents / km ²). The phenomena of modernization are rather contained and have not led to real urban growth. The capital, Port Moresby, does not reach 200. 000 residents within the entire district, while the immediately following population centers are Lae (80. 700 residents) and Madang (27. 000); the urban population represents just 17 % of the total (1998). The demographic imbalance is accentuating in favor of the eastern coastal fringe, to the detriment of both the inland areas and the regions bordering the Gulf of Papua (except the capital area) and, finally, the border area with the Irian region Jaya (the Indonesian part of New Guinea), where the effects of the tensions and clashes taking place across the border are felt.

The country’s economic situation presents potentially favorable growth prospects. Papua New Guinea has good productions, among others, of oil (whose extraction has only recently begun), gold, wood, copper, coffee, palm oil, which in this order are among the first items of export (1996) . Exports are much more consistent in imports and the average growth rate of GDP was in the decade 1985 – 95, of 4, 2 %. Overall, however, per capita GDP is not very high, hovering around $ 890 in 1998.

Various conditions are holding back the start of adequate development: dependence on mining and forestry production, with low added value and mainly guaranteed by foreign companies, which does not give rise to accumulation or reinvestment in the manufacturing sector; the lack of territorial infrastructures, starting with terrestrial communication routes; natural isolation, only partially obviated by a free trade agreement with Australia (1991) and by joining APEC (Asia Pacific Economic Cooperation, 1993); the growing effects of deforestation, albeit far less noticeable than in the western half of New Guinea; the dispute between local populations and concessionary companies of mining and forestry activities, regarding land ownership rights; finally, the severe drought which, in recent years, has hit the country, especially in the highlands region. Furthermore, the repercussions of the confrontation taking place in Irian Jaya have been very serious for years, and the consequences of the independence attempts on the island of Bougainville, which not only cause permanent political instability in Papua New Guinea, but also cause heavy military spending and recurrent contractions. in the production of copper (which in Bougainville is extracted from the largest open pit mine in the world).