Colombia. President Ernesto Samper Pizano was subjected to a new storm of criticism at the beginning of the year. Congress convened a crisis meeting in late January, after detained former Secretary of Defense Fernando Botero in a statement claiming that the president had deliberately received millions of dollars from the Cali drug cartel for his 1994 election campaign., maintained that he had no part in the deal. Samper once again asserted his innocence, blamed Botero for lying, and asked the congress for a referendum on whether he would remain as president or resign. But more and more demanded his departure. The requirement was supported by 15 organizations in the business community and by about 4,000 students, who demonstrated on January 26 outside the presidential palace in Bogotá. Representatives of 15 large employers’ organizations repeated the claim on April 29. The crisis escalated during the year, when four ministers gradually left the government.

Attorney General Alfonso Valdivieso completed his 19-month investigation on February 14 and formally presented a series of charges against Ernesto Samper. As evidence, he presented about 1,000 documents and a series of video recordings to Congress. On March 15, the Supreme Court agreed three witnesses as witnesses. Of those, Foreign Minister Rodrigo García-Peña resigned four days later. However, Samper received political support. A congressional committee proposed May 23 that Congress should not accuse the president, and the Chamber of Deputies voted June 12 with the numbers 111 against 43 to purge the president. The decision meant that he could not be brought before national law.

The US government responded July 11 by revoking the president’s visa to the United States. The following day, however, a declaration was made by the presidents of a number of Central American states and Chile’s president in support of Samper, adopted at a meeting in Costa Rica, and the Rio Group’s meeting in Bolivia on July 15 made a similar statement of support. However, the serious disruption of Colombia’s relationship with the United States continued, and Robert Gelbard, the US Secretary of State for International Drugs, accused the Sampers Government of lying. Colombia’s Vice President Humberto de la Calle resigned on September 10, at the same time urging the President to follow the example. de la Calle was succeeded by the country’s ambassador to the United Kingdom, former Foreign Minister Carlos Lemos-Simmonds, appointed by Congress with 151 out of 265 votes.

The pursuit of drug cartel leaders continued during the year with varying success. Cali leader José Santacruz Londono, whose arrest in July of the year was highlighted as a big victory for the government, escaped January 11 from a security prison in Bogotá. The Medellín cartel leader, Juan David Ochoa, and his younger brother Jorge Luis Ochoa were released in July after serving parts of the prison sentences to which they were sentenced. The releases sharpened the already tense relationship with the United States. In late September, police arrested Miguel Rodriguez, one of the Cali cartel’s leaders. Cali leader Helmer “Paco” Herrera Buitrago handed himself over to the police at the same time. A large cocaine seizure was made in two laboratories in Caquetá Province in southern Colombia in July. Over 2.3 tonnes of cocaine lay ready for transport to the United States. A large drug factory in southeastern Colombia was destroyed by military in early November. One of the leaders of the Cali cartel, Efrain Hernandez, was killed in a fire in Bogotá at the same time.

Political violence from various guerrilla groups continued throughout the year. Masked men from a right-wing guerrilla shot and threw hand grenades into a crowd in the city of Segovia, killing 15 people. In March, new terrorist attacks came: eleven policemen were killed in an attack on the city of Chalan, three buses exploded with fire bombs in the capital Bogotá and about 200 guerrillas from the FARC guerrilla stormed a police unit deployed to fight drugs in the city of Miraflores.

In a firefight between army soldiers and guerrillas in the country’s northwest, 18 people were killed on October 20. At the beginning of December, some 30 people were killed as a result of political violence. In addition, several unionically active Colombians were murdered during the year.

In September, the number of murdered or kidnapped children also reached such a height that they talked about Colombia’s “black September”. Quite peaceful, however, was the sitting strike carried out by 15 Indian leaders at the Swedish embassy in Bogotá in protest of Skanska’s power plant construction in Urra in the north of the country. With Swedish Ambassador Björn Sternby as an observer, the Indian representatives met with Colombian government representatives, discussing the fulfillment of Skanska’s pledges regarding the impact of the fishery. 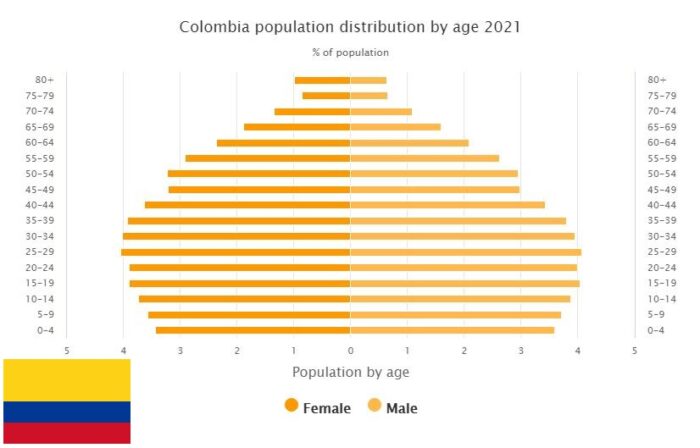