Uzbekistan. During the year, a rapprochement between Uzbekistan and the United States could be noticed. Uzbekistan has supported US sanctions against Iran, which the US has accused of being linked to international terrorism. At a meeting of the Islamic Association Economic Co-operation Organization (ECO) in the Turkmen capital of Ashgabat, the Uzbek men threatened to leave the organization, citing Iran’s attempts to police it.

The government’s economic program for 1996 aimed to limit inflation to 2% per month – inflation in 1995 was 74% – and to stabilize the domestic currency. In November, the right for foreign businessmen in the country to be paid for their goods in convertible currency was revoked, with retroactive effect. This was to the effect that the black exchange rate on the US dollar tripled.

In 1924, the Soviet government reorganized the borders of Central Asia on the basis of ethnic criteria. the Socialist Soviet Republic of Uzbekistan. In May 1925, the Republic was formally incorporated into the Soviet Union. Until 1929, the Autonomous Socialist Soviet Republic of Tajikistan was part of Uzbekistan, where it was elevated to an independent republic. During the Moscow processes in 1937-38, several Uzbek people were sentenced to death. This included Prime Minister Fayzullah Khodzhayev and First Secretary of the Republic Communist Party, Akmal Ikramov. In 1953, both leaders were rehabilitated.

The socialist reforms carried out in Uzbekistan were primarily aimed at exploiting the region’s agricultural potential. The state built large canals: Great Fergana, North Fergana, Tashkent as well as the Kattakurgan hydroelectric plants across the Zeravshan River and Akhangaran, both of which had modern irrigation systems. During the period 1956-83 Sharaf Rashidov was the first secretary of the Communist Party and the head of government, and under him the economic potential of the republic developed – on the basis of cotton cultivation. The Republic became the Soviet’s main supplier of cotton and was the world’s third largest producer.

Throughout the 1940s the population increased – among other things. through the immigration of Kurds and Turks from the Caucasus. The ethnic and political stability of the republic lasted until the 1980s. With the deployment of Yuri Andropov as Secretary General of the Soviet Communist Party in 1985, the leadership of the party in Uzbekistan was also replaced. The new party’s first secretary, Inamjon Ousmankhodjaev, could subsequently reveal that the cotton harvest figures had been falsified by his predecessor.

The so-called “Uzbek corruption case” was the biggest scandal in the Soviet Union until then. It led to arrests, lawsuits against 4,000 officials and purges within the party, but without fundamentally changing conditions.

In 1985, Mikhail Gorbachov came to power. The changes he initiated, the deterioration of the economic situation and the weakening of the central power led to an increasing number of ethnic and religious conflicts in Uzbekistan. The Uzbek are predominantly Sunni Muslims and opposed the party’s anti-religious stance.

The Soviet invasion of Afghanistan where the superpower fought against other Sunni Muslims only worsened the situation. All of this helped to create a hostile climate in the Republic against Moscow and the Russian minority in the Republic. This was the background of the June 1989 conflict in the Fergana region and the clashes in Namangan in December 1990.

In August 1991, Uzbekistan’s Supreme Soviet (Parliament) passed the Law of Independence, and on December 12, the Uzbek delegation in Alma Ata signed the Protocol on the Formation of the State Society of Independent States (CIS) – the successor to the dissolved Soviet Union. On the 29th of the month, a referendum and presidential elections were held in Uzbekistan. A majority voted for independence and the Communist Party’s former first secretary, Islam Karimov, was elected the new country’s first president. 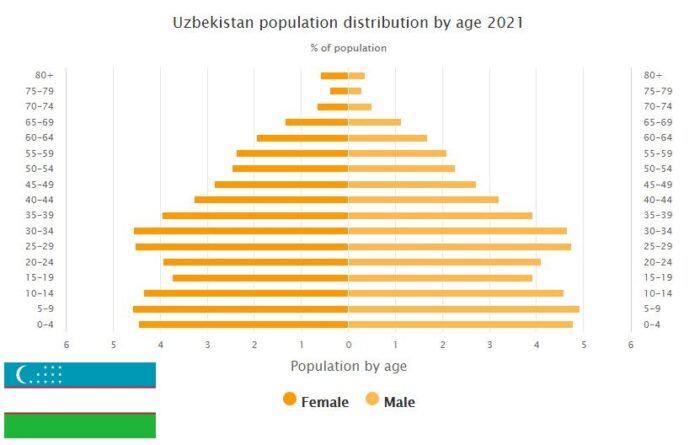