Uganda. In May, the first presidential election was held in the country since 1980. The number of candidates was three. Among them, incumbent President Yoweri Museveni resigned with a very convincing victory with nearly 75% of the vote.

Museveni went for election on the slogan “No Change”. It was understood that he wanted his sympathizers to join a system without any political parties. Instead, he advocated an African system based on consensus, not confrontation. In the subsequent elections to the country’s national assembly, the “no-party” system received a majority of the 276 seats.

In July, Museveni appointed its new government. It contained a total of 51 members – up to a maximum stipulated by the Constitution 42. Kintu Musoke was appointed Prime Minister.

The civil war displaced about 100,000 people. In 1981, thousands of people died of starvation in Karamoja province after the government cut down on the smuggling of cattle between nomadic tribes.

Despite the guerrilla struggle, the country’s economy grew an average of 5% from 1982, while exports according to. The World Bank grew by 45% from 1983. It was mainly agricultural products that contributed to this high figure. The shortage of food and the ration of gasoline ceased, but the major problem was continued inflation that had worsened since 1981, when the government had let the country’s currency flow. That led to a devaluation of 1,000% of the Ugandan shilling. The price of bread rose, for example. 5,000% in the period 1979-84.

In December 1985, it was planned that new elections would be held in which the UPC was again victorious, but in July a coup d’etat led by General Bazilio Olara Okello, the Obote government, fell. General Tito Okello was named president and declared that within 12 months new elections would be held to “form a government with a broad popular basis”. Okello belonged to the ajuli people from the northern part of the country and accused Obote of the langi people of “unilateral tribal domination”.

From the coup d’etat, the NRA escalated the armed struggle until it was able to occupy Kampala in January 1986. Okello was overthrown after a bloody battle, and on January 30, NRA leader Yoweri Museveni took over the presidential post. In March, Golu fell in the north of the country – the last bastion of the Okello faith forces.

Museveni had to largely rebuild the country from the ground after the protracted wars that had cost nearly 1 million dead, sent 2 million on the run, created 600,000 invalids of war and caused enormous material destruction.

Resources were sparse in a country where the birth index is 6.9 and life expectancy does not exceed 51 years. Add to this the many cases of AIDS that had hit parts of the country as a real epidemic.

In the Lake Victoria area, precipitation is 2,000 mm per year, in the other parts of the country an average of 1,300 mm. In the north the dry season is from December to March, in the south from June to August. The average temperature in Kampala is 22 ° C. 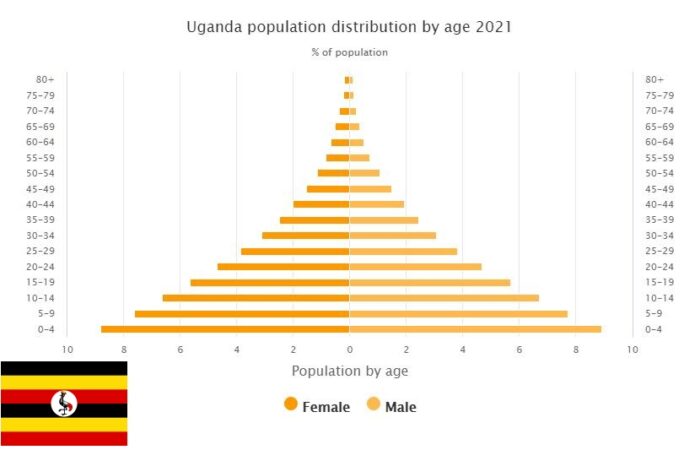