Turkey. A long government crisis was resolved – temporarily – at the end of February when the Fosterland Party (Anavatan Partisi, ANAP) and the Right Road Party (Doğru Yol Partisi, DYP) formed a coalition. ANAP leader Mesut Yılmaz became prime minister, but would later be replaced by DYP’s Tansu Çiller. The government won a vote of confidence on March 12 thanks to 80 abstentions. See rctoysadvice.com for Turkey travel guide.

Barely the government had taken office until the Islamic Welfare Party (Refah Partisi, RP) ran through an investigation into whether Çiller had previously enriched himself in the tendering process for contracts with the state electricity agency. The inquiry was set up with the support of ANAP members. Shortly thereafter, Parliament also decided to investigate whether Çiller benefited from the privatization of the car manufacturer Tofas. Again, ANAP members voted against her. Then, when the Constitutional Court rejected the vote of confidence in March, because so many abstained from voting that the government did not receive the required majority, the DYP left the coalition. Since RP requested a declaration of no confidence in the government, Yılmaz also resigned. Although Çiller previously promised never to cooperate with RP, she now snapped at an invitation from the party, since the Islamists saved her from a third corruption investigation. RP leader Necmettin Erbakan became prime minister, a post that Çiller will take over later during the term of office. Erbakan, Turkey’s first Islamist head of government, assured that the country’s secular ideals are firm.

The new government’s first crisis became a hunger strike among thousands of political prisoners during the summer. Twelve died before the government promised better conditions in prisons. Several foreign governments and organizations criticized the lack of respect for human rights in Turkey. The European Court of Justice also condemned the handling of the hunger strike, as well as the treatment of the Kurdish minority. Shortly thereafter, the European Parliament made a contribution to Turkey of almost half a billion SEK. The disbursement of that aid had previously been delayed by Greece after the Aegean conflict at the beginning of the year.

A political scandal burst in the fall after a right-wing extremist mafia boss and a former police officer died in a car accident. In the car, which was loaded with weapons, there was also a MP for DYP. The Mafia boss was suspected of taking part in the attack against the Pope in 1981 and of murdering Turkish left-wing activists in the 1970s. As the mildly injured MP leads a citizen guard against the Kurdish guerrillas, suspicions were raised that the dead gangster could have been behind many of the more than 3,000 unresolved murders committed in Kurdistan since the 1980s. The connection between the government and organized crime caused the Interior Minister, belonging to the DYP, to resign.

The war in Kurdistan continued with hundreds more casualties. Gerilla Kurdistan’s Workers’ Party (Partya Karker谷n Kurdistan, PKK) began to resort to suicide attacks against soldiers and police. Three young women killed themselves and a total of 18 other people.

The free word is still very crowded in Turkey. In the first half of the year alone, according to the Turkish Journalists Association, 73 journalists were arrested in connection with their professional practice. A journalist was beaten to death by police. The country’s internationally best-known author, Yaşar Kemal, was sentenced to 20 months’ imprisonment on condition that in a writing he criticized the handling of the Kurdish issue. Kemal was forced to go to Sweden to continue working.

Despite massive EU financial support for the dictatorship, the country’s economic and security crisis grew ever deeper in 2016. Russia’s boycott of the country hit its tourism sector hard and in June, Erdogan surprisingly apologized for the Russian plane crash in November 2015. The apology confirmed the Russian version of the story, that Turkey had unjustly shot down the plane over Syrian territory, and at the same time it gave NATO a serious explanation problem. Since November, NATO had used the incident as a piece in its history of Russia as aggressive superpower. In addition to Russia, Turkey also sought reconciliation with Israel, which in 2010 carried out a military piracy campaign against a Turkish ship in the Mediterranean and killed 9 Turkish nationals.

In terms of security, the security situation was further aggravated during 2016 following several attacks by both IS and the Turkish intelligence service. In June, IS launched an attack on Istanbul’s international airport, killing 42. The action indicated that the organization was heavily pressured on land in both Syria and Iraq, where it both lost ground.

Domestically, the dictatorship tightened the grip on different thinking. In June, the regime targeted the Özgür Gündem daily , which was threatened with closure. Turkish editor Can Dündar, who had previously imprisoned Erdogan, was one day appointed co-editor of the newspaper in solidarity. The state responded again by arresting Erol Onderoglu of Journalists Without Borders, journalist Ahmet Nesin and Sebnem Korur Fincanci of the Turkish human rights organization. They were charged with protesting the state’s campaign against Özgür Gündem. (Turkish journalists rally behind pro-Kurdish paper after arrests, Guardian 21/6 2016)

In Denmark, the state supported the Turkish dictatorship’s fight against the Kurds. In June, two elderly Kurds were sentenced to jail by the Eastern Lands Court for “having collected money for the Kurds”. They were previously acquitted in the City of Copenhagen. In the conflict between Turkey and the United States on the view of the Kurds, Denmark took a stand on Turkey’s side in the fight against the Kurds, while the US in alliance with the Kurds fought IS in Syria and Iraq.

Not only Denmark but also Germany were in the pocket of the dictator. In March, Erdogan stretched his fight against free speech outside Turkey, demanding a song written for a German satire program be banned. Erdogan put pressure on Germany, and in April Chancellor Merkel promised to “solve the problem”. A month later, the Hamburg court issued an order censoring most of the lyrics of the song Erdowie, Erdowo, Erdogan written by comedian Jan Böhmermann, citing a law of 1871 prohibiting the insult of foreign heads of state. (Turkey ‘demands deletion’ of German video mocking Erdoğan, Guardian 29/3 2016) (German Comic to Fight Ruling on Poem Insulting Turkish Leader, New York Times18/5 2016). Since 2014, the Turkish state had brought 1874 lawsuits against people making fun of the dictator.

The EU continued to send refugees back to Turkey in violation of the UN Refugee Convention, which explicitly prohibits return to countries where refugee lives are at risk. In just one day in June, Turkish border guards killed 8 refugees (3 children, 4 women and 1 man) who sought to flee across the border from Syria. Several dozens had already been killed by Turkey in the past. It is predominantly Kurdish refugees Turks aim their guns (Turkish border guards kill eight Syrian refugees – reports, Guardian 19/6 2016) (Turkey is no ‘safe haven’ for refugees – it shoots them at the border, Guardian 1/4 2016).

In February 2016, the British organization Conflict Armament Research published a comprehensive report on IS weapons production. The report documented that the production has an industrial scale, mainly based on raw materials supplied from Turkey or a large number of other Western or Asian countries that send the raw materials through Turkey. Since 2012, IS has been financed predominantly through the sale of oil to Turkey. (Report: ISIS manufacturing arms on industrial scale, Daily Star 14/12 2016; TRACING THE SUPPLY OF COMPONENTS USED IN ISLAMIC STATE IEDs, Conflict Armament Research, February 2016).

On the Mediterranean coast, subtropical climate with mild winters; warm and humid climate with precipitation throughout the year. Anatolia has a continental steppe climate with hot summers (up to 35 ° C) and cold winters (down to -35 ° C). In Ankara, rainfall averages 370mm per year. 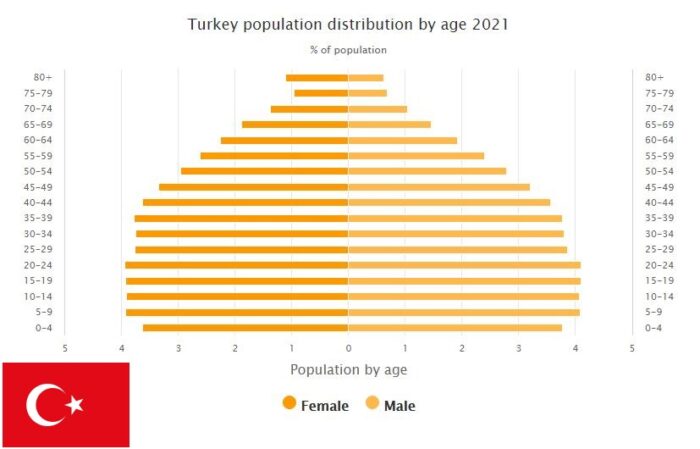