Saudi Arabia. Low oil prices continued during the year to erode the welfare of Saudi Arabia and provide the breeding ground for a growing militant Islamism. A power struggle in the country’s supreme leadership prevented powerful government intervention. King Fahd, who, after a stroke in 1995, handed over his powers to his half-brother, Crown Prince Abdullah, returned to power in February. However, he was far from healthy and Abdullah was allowed to continue to do daily work, while the king’s six full brothers competed with him for power.

In May, four Saudi Islamists were arrested for an explosive attack in 1995 against a US military facility in Riyadh. In June, less than a month after the executions, an American air base in Dhahran on the Persian Gulf was subjected to an explosive attack. Nineteen Americans were killed.

The Islamists believe that the government’s interpretation of Islam gives way to excessive concessions to the Western world, especially the United States. arms. But the Islamist opposition is divided and has no major support among the people, who are already subject to very strict Islamic laws.

The accusations by Muslim fundamentalists about the Saudi dynasty’s alleged betrayal of Islam led to numerous violent clashes down government forces. Many analysts interpreted these episodes as a symptom of dissatisfaction in broad sectors of society, which could also help launch a new ” Wahabism “, this time with popular support. The new generations of the royal family with their academic and military education from Europe and the United States – and not from the Koran schools in the desert tents – gradually gained access to power, and it was often judged as a distance from the theological basis that legitimized the Saudi kingdom..

After the shah of the fall of Iran, the Saudi royal house grew ever closer to the United States. After King Khaled’s death on June 13, 1982, the transition happened without the major problems and power was conferred on Khaled’s brother, Fahd, who had been the architect of Saudi Arabia’s modernization.

The new king had, a year earlier, been the man behind a Middle East peace plan that had won the support of several Arab countries, the PLO and the United States, but in August 1981 the project sailed, following strong opposition from Israel. This plan called for the establishment of a Palestinian state, with Jerusalem as its capital; for a withdrawal of the Israeli forces from the occupied Arab territories and finally a closure of the Jewish settlements that had been erected since 1967. In addition, the plan advocated recognition that all the nations of the region had the right to “live in peace”. On September 26, 1982, on his pilgrimage to Mecca, the King condemned the Israeli intervention in Lebanon, which he characterized as a “criminal act.” On the same occasion, he criticized the Soviet intervention in Afghanistan, accused Ayatollah Khomeini of trying to destabilize the region by means of sabotage actions, and in general terms, condemned the influence of the superpowers on the Islamic world.

The Saudi alliance with Washington later became more evident with the supplies of advanced weapons systems and aircraft types that could only be operated by North American pilots. The construction of naval bases in Jubail and Jiddah was also under the direction of the North American Engineers Corps. In addition, the King’s bank deposits and investments were linked to the North American economy: 2/3 of all Saudi Arabia’s “petrodollars” invested abroad consist of North American corporate shares, bonds and bank accounts.

The official development programs outlined an industrial policy that should make the country less dependent on oil resources. Priority was given to the petrochemical industry and industrial centers began to emerge. 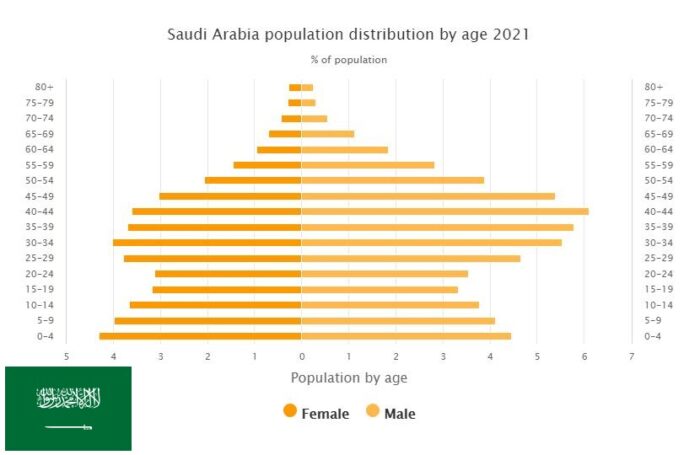