Senegal. The country’s president, Abdou Diouf, announced in January that a Senate would be set up as a special chamber for legislative matters. It was intended to give a wider representation to local government agencies.

At the ruling Party Socialist Sénégalais (PS) thirteenth congress in March, Abdou Diouf was elected to the newly established post as party chairman.

The separation movement MFDC (Mouvement des forces démocratiques de la Casamance), which has been active in the country’s southern province of Casamance since the early 1980s, signaled at the beginning of the year that it was possible to start peace negotiations with a 1995 national peace commission appointed (Commission national de paix, CNP).

The International Labor Organization (ILO), a trade union body within the UN, published in April a report on the difficulties in abolishing child labor in the world. In Senegal, among others, according to the report, at least a quarter of children aged 5-15 were routinely employed with working hours of up to nine hours per day, six or seven days a week.

A referendum in March 2016, with 63%, passed a constitutional amendment which meant that a president would only be able to sit for two terms in the future and shorten the period from 7 to 5 years. However, the incumbent president spent his 7-year term. The voting percentage at the poll was only 40%, and it was also characterized by some violent clashes.

Rapper Ramatoulaye Diallo, aka Déesse Major, was arrested and detained for 3 days in June, charged with “indecency” and “violating moral principles” due to his clothing choice in a music video posted on social media. The charges were dropped after 3 days and she was released.

At least 6 people died in police custody during 2016, including one who was shot and killed during a prison riot in Rebeuss prison in Dakar in September. 41 were wounded during the uprising, including 14 prison officers. The prison was intended for 1,600 prisoners, but had 2090.

Gross national product (GNP, per resident and year): US $ 950

State and form of government
Constitution of 2001
Presidential republic
Parliament: National Assembly (Assemblée Nationale) with 165 members, election every 5 years
Direct election of the head of state every 7 years (one re-election)
Right to vote from 18 years of age

Employed by economic sector: no information

Unemployment (in% of all economically active persons)
no information 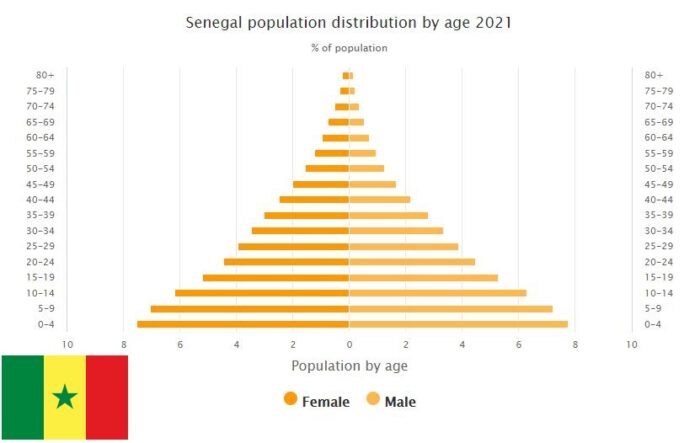