Norway. The dominant political event was that Prime Minister Gro Harlem Brundtland resigned in October after three terms as head of government and 15 years as leader of the Labor Party. She appeared during the year in discussions about who would become the new UN Secretary-General. New Prime Minister Thorbjørn Jagland. In connection with his accession on October 25, some refurnishing was carried out within the government. Seven new ministers were appointed; inter alia became the dean author Anne Holt Minister of Justice and the internationally known diplomat Terje Rød-Larsen planning minister with responsibility for future issues. Larsen’s time in government, however, fell short. He was forced to resign just under a month after taking office, when a ten-year-old options business became the subject of a police investigation. Ten days later, the newly appointed oil minister, Grete Faremo, was forced to leave. Faremo’s departure was a continuation of the spring turbulence, when Brundtland was accused of trivializing the so-called Lund Commission’s report on the police’s surveillance service, which until 1981 intercepted tens of thousands of Norwegian citizens in a survey of left-wing radicals. The report also revealed that the survey until 1971 was carried out in collaboration with the Labor Party. In the late autumn, it was discovered that during the course of the investigation, the Norwegian security service requested information from German colleagues about one of the Commission’s members and what information the Commission was given. Grete Faremo, who during this time was Minister of Justice, took the consequences and resigned, together with Security Police Chief Hans Olav Østgaard.

Environmental cooperation with the Russian Federation on the Barents Sea, despite great promises and personal visits by Yeltsin at the beginning of the year, was slow. The fact that a former captain of the Russian Navy, Aleksandr Nikitin, was imprisoned in February on charges of spying for his cooperation with the Norwegian environmental movement Bellona, delayed the work further. Fishing quotas were another topic that gained a lot of space during the year. Negotiations on the quotas broke down on several levels, and Norway was accused of raising their quotas at the expense of the neighbors. The internationally criticized Norwegian whaling caught an increase in catch quotas for 1997.

Economically, 1996 was a strong year. The state budget for the year was predicted a surplus of around SEK 40 billion. For the employees, the year meant the biggest pay rise in 20 years. Unemployment was falling from an already low 4%. To avoid an overheated market, the new Finance Minister Jens Stoltenberg, together with the government, presented a austerity package for 1997. According to the proposal, two-thirds of the state’s oil income would be reserved in a special fund for future pension costs. The proposal, however, aroused protests from the municipal side, where cuts hit, among other things. childcare and schools greatly. It was argued that the rich state must contribute to the poor municipalities, which were bound by tax cuts in combination with rising spending. See themakeupexplorer.com for Norway economy.

For collective services such as education and health care, the norm of equal treatment leads to very different public expenditure. Tax revenues must therefore generally be transferred from densely populated to sparsely populated regions.

This is even clearer within the transport sector that is so important to Norway. The development of transport networks, of mail, telecommunications services and radio / TV, is based on a regular transfer of resources from profitable to unprofitable operating areas. It is necessary for the services to cover the whole kingdom. The cost per participant becomes high in the center and low in the periphery, compared to the construction costs when the rate is based on equal treatment.

Private associations are also run on the premise that it is expensive to do something «Norwegian» – meaning nationwide. The distances to be overcome must be offset by taxing someone and subsidizing others.

This is at the same time the explanation for the strong organizational loyalty that characterizes all Norwegian public life.

The organizations – state as well as private – develop effective requirements for connection. The costs of establishing an alternative organization are so high that the project is impossible. For these reasons, the organizational structure of Norwegian public life is strikingly centralized, characterized by stricter control over its members than in many other countries. The cost of forming alternative organizations in e.g. Denmark and England are so small that public life is marked by pluralism to a completely different extent than in Norway: of association revolts, divisions, multi-track systems and optional channels.

Organizational loyalty greatly benefits the Norwegian party system and, through it, parliamentarism, in the sense of the Storting’s authority and the dominance of the party structure over the political information flow.

The principle that each person has one vote also applies outside of politics. The word “power” was not in use in Norwegian until the press began to borrow it from Sweden in the 1960s. From traditional Norwegian drawing, everyone is equal and no one has “power” over others. This is a cultural feature of great depth, and beats every foreigner with wonder. Norwegians generally find other countries unjust as well; power is unevenly distributed and some have advantages that are not discussed.

No scientific answer has ever been given as to why Norwegian thinking has this egalitarian character. But everyone who has tried to rule Norway – Danes, Swedes and Germans – has met the grumbling opposition to any form of discrimination. It is also an essential quality of Norwegian organizational life. Protest organizations raised on social indignation are often strong in Norway, and are governed by internal loyalty requirements.

In an organizational culture such as the labor movement, loyalty requirements are particularly strong. Norway has a tighter organized socialism than any other country. The slogan of “unity” goes again in all parties on the left, and not least the ideology of the trade union movement. The union and union organization and the resource transfer that these large organizations control during the bargaining and wage conflicts are underpinned by the notion that “assembly” is the only thing that gives fighting power and strength to the trade union movement. In reality, this is a highly debatable claim, cf. Britain where a decentralized structure gives the trade union considerable power.

Organizational affiliation also promotes a number of more general norms in political life. Norwegian policy awards the stable and lasting. The political innovator is doomed to failure, as is the party-changing party. This attitude must be strong, be carried forward by one who always has had it and always will have it. Finally, organizational control promotes widespread Puritanism that promotes consensus and isolates deviance. It characterizes organizational life far beyond the religious circles where purity is a recognized goal.

These standards of public behavior ensure a strong organizational stability in Norway. It is likely that they will prevent renewal at the same time. What is most striking is the low self-awareness that Norwegian politics produces within these structures. Despite a comprehensive and almost provincial interest in everything that is domestic and Norwegian, the country’s uniqueness seems to be only slightly acknowledged. In this respect, Norwegian politics has a certain naive character, with hypocrisy as a widespread characteristic.

Cultural life in Norway shares many characteristics with public life in general. It is well-organized and woven into public bodies as a state-run enterprise in line with agriculture.

The strongest organizations are the religious ones. Religious life in Norway is from an old age an association life, supported and partly maintained by the state. The weakest organization is the Norwegian Church, where membership is automatic. The state church system is debated – even within the church – but seems to be maintained for the foreseeable future because the Labor Party prefers this church system: It ensures control.

Creative artistic activity also takes place within a strictly organized framework, and must do so for the sake of extensive government support. The strong artist organizations act as a distribution system, which through the distribution of state funds gets some linguistic character. An artist is defined by other artists and thus becomes subsidized. This is all the more important because artistic activity is increasingly being pulled out of the market; It operates predominantly independent of actual user or audience demand. For example, Norwegian fiction receives subsidies of around 50,000 kroner per year. title – predominantly channeled to the professional literature of fiction, which accepts members according to internal rules.

State subsidies are also needed to maintain the press structure in Norway. In principle, the newspaper remains a market commodity in the sense that there is a newspaper market where self-financed products can be thrown in and traded. That the daily produced 2 million newspapers should be distributed to the approx. 150 newspapers in Norway, on the other hand, are a consequence of the state aid to the most exposed. The Storting is close to the press in political and business recruitment, and has in practice decided that all Norwegian newspapers must pass. This gives the Norwegian press system the decidedly highest number of publications in the world in relation to the population.

It is debatable whether the overall responsibility in Norwegian cultural and art life is a result of the comprehensive state support and the resulting self-esteem in the cultural organizations. The responsible public information ethic is probably older than the relatively young state corporate system, with traditions dating back to the early 19th century. On the other hand, it may seem that the link to the state does not promote a critical cultural life at least. 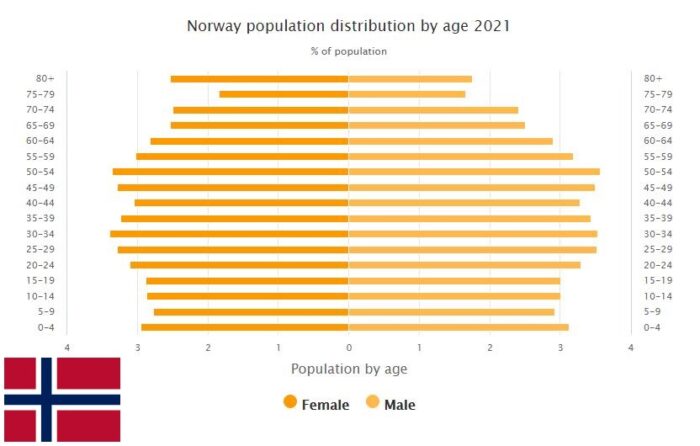