Namibia. A dispute over limited water resources in the region began in December between Namibia and Botswana, Africa’s two driest countries. Botswana opposed N’s plans to conduct water in a 55 km long pipeline from the Okavango River to the capital Windhoek. The authorities in Namibia agreed to conduct an environmental study to analyze the project’s consequences.

The struggle for independence

The struggle for an independent Namibia has been a long one, and has been waged along many front lines. As early as 1966, the UN General Assembly decided that Namibia should no longer fall under the mandate of South Africa. This was confirmed by the Security Council in 1969. In 1971, the International Court of Justice in The Hague declared that South Africa’s “administration” was invalid.

The Namibian popular liberation struggle was led by the South West African Peoples Organization (SWAPO), which was founded in 1959. Herman ja Toivo and Namibia’s current president, Sam Nujoma, were among the founders of the organization. Toivo was captured by the South Africans in 1966 and sent to Robben Island, where Nelson Mandela was also imprisoned. Because of South Africa’s intensified repression, in 1962 SWAPO decided that the political and armed struggle for liberation had to be developed side by side. A military force was then created: PLAN (The People’s Liberation Army of Namibia). On August 26, 1966, the armed liberation struggle against the South African occupation force began.

Throughout the 1960s, SWAPO’s strength increased, while opposition to South Africa was expressed through extensive strikes, demonstrations and mass actions. Despite South African attempts to weaken the organization both politically and militarily, the liberation struggle became increasingly intense throughout the 1970s. Angola’s independence under the leadership of the MPLA in 1975-76 meant that the neighboring country in the north became a support area for SWAPO. At the same time, it increased the Western world’s interest in reaching a solution – the West feared that Namibia would also become socialist.

Hoping to reach an “internal solution”, based on cooperation between the white rulers and selected leaders of the ethnic groups, the so-called Turnhalle negotiations were initiated in 1976. The intention was to establish an authority with a shine of legitimacy, at the same time that SWAPO was kept outside. However, due to SWAPO’s support of the population and military strength, this attempt by the South African failed. In 1977, instead, the Western powers began a diplomatic offensive. In the spring of 1978, both SWAPO and the South African government basically agreed to negotiate a transitional regime with a ceasefire, South African withdrawal of troops, elections under UN supervision after a period of open political activity, etc.

In May 1978, South Africa carried out a terrorist campaign against the Cassinga camp in Angola, killing about 1,000 people, and in September the apartheid regime withdrew from the negotiations and instead made a well-organized “election” on its own. At the same time, the fight against SWAPO was stepped up. Many expected the UN Security Council to adopt sanctions and effective countermeasures for the first time, but the UN was once again passivated by the Western powers. The backdrop was the West’s own major economic interests in the country.

The interests of the multinational and South African companies in the country were extensive and completely dominant in agriculture, fisheries and mining. It was especially within the latter that the investments were concentrated by the English, North American, German and South African groups. The Consolidated Diamond Mines Group alone – a subsidiary of the multinational Anglo American – covered 40% of the South African administrative costs in the country through its payments for mining rights.

Another important mining area is found at the town of Swakopmund, where the Rössing uranium mine is located. It is the world’s largest strip mine (open mine) and controlled by the British multinational group Rio Tinto Zinc. Namibia has 15% of the world’s known uranium reserves, and from this mine Rio Tinto extracted uranium dioxide, which, despite the UN’s explicit prohibition, was used in nuclear power plants in South Africa, France and the United Kingdom. Two other multinational groups – ELF-Aquitaine from France and the South African Anglo American – have concessions on uranium extraction in Namibia.

The two North American companies AMEX and Newmont are affiliated with Tsumeb Mining Co. and extracting copper and sulfur kis from the mines in Otjihase. All these companies benefited from the generous concessions South Africa gave to the foreign corporations. At the same time, the colonial administration in Windhoek followed the usual pattern of looting colonies. The country produced raw materials for export and imported all the necessities – especially food. Namibia exported corn, meat and fish – predominantly to South Africa – and imported wheat and rice. It exported minerals, and imported all kinds of processed goods, for the country did not have its own industry. 90% of consumer goods in Namibia came from South Africa.

The colonial situation continued until 1990, ensuring that the small European minority could consume 81.5% of the gross domestic product, while the indigenous population had to cope with the remaining 18.5%. When the country gained its independence, 3/4 of agriculture and cattle farming was in the hands of landowners of European descent. Annual income was $ 1,410, one of the highest in Africa, but covered huge inequalities. While it was among the Europeans at $ 1,880, it was among the natives at 108. 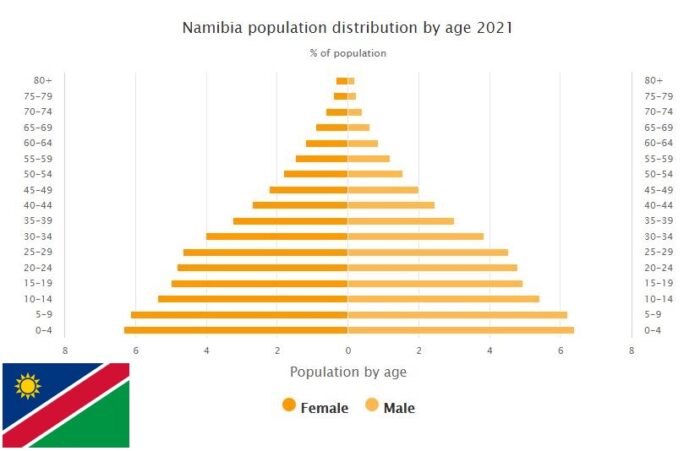