Mozambique. According to the World Bank, the annual income per person in Mozambique in 1994 was the lowest in the world: SEK 530. In 1996, tourists were welcomed back in the country after the end of the 17-year civil war. Mozambique is one of seven member countries of the newly formed Commonwealth for Portuguese-speaking countries, the Comunidade de Paises de Língua Portuguesa (CPLP), which works to spread the Portuguese and increase cooperation between the member countries.

When Zanzíbar managed to throw the Portuguese on the gate, they had only the slave trade left to make money on. Attempts to unite Mozambique and Angola over land also failed repeatedly. European control was, therefore, essentially confined to a narrow coastal strip, where their entire “administration” confined itself to granting concessions over vast lands to adventurous Portuguese and Indians who invaded the country on plundering expeditions and in search of slaves. Inland, they set up their own regimes that were in fact independent of Portugal. When, therefore, around 1890, England questioned the Portuguese’s control over the country and threatened to occupy it, the Portuguese were forced to demonstrate their effective control over the country, which happened by forceand only after several wars against the local gentlemen. However, the conquest of the interior of the country was only completed around 1920 with the defeat of King Mokombe in the Tete area.

Portugal, however, only managed to build a colonial regime by leaving large areas directly to concessionaires. These companies were dominated by Western European and South African capital. They were responsible for the administration and tax collection, started tea and sugar plantations, exercised a trade monopoly, initiated various forms of forced labor, etc.

After 1930, the Portuguese state took over more of the administration, stimulating immigration from Portugal. The result of this was that approx. half of the land in the most fertile provinces was occupied by Portuguese landlords. In addition, the legislation was designed to separate lawless “natives”. An attempt was made to create a myth that the Portuguese colonial rule was non-racist, as the Africans on paper could attain the status of “assimilados”. But this never happened to more than 1% of the population. Hardly any other colonial power went as far as Portugal to impose its language, culture and religion upon the inhabitants, while illiteracy, infant mortality, etc. were higher than in most other African countries. (See Colonialism).

Under Salazar’s colonial fascist rule in Portugal, a doctrine of Portugal and the colonies was devised as a “self-sufficient community.” Within the empire’s division of labor, the colonies were to supply cheap commodities – through the forced cultivation of cotton, which Portugal used in its own industry or sold at higher prices on the world market. Foreign currency was also transferred to the “mother country”, which was the result of extensive agreements with South Africa on the export of African migrant workers to mines and agriculture in the apartheid state. From 1910 to 1975, an average of 100,000 from Mozambique was on this kind of work. In economic terms, the southern part of Mozambique had to be considered almost a South African colony. 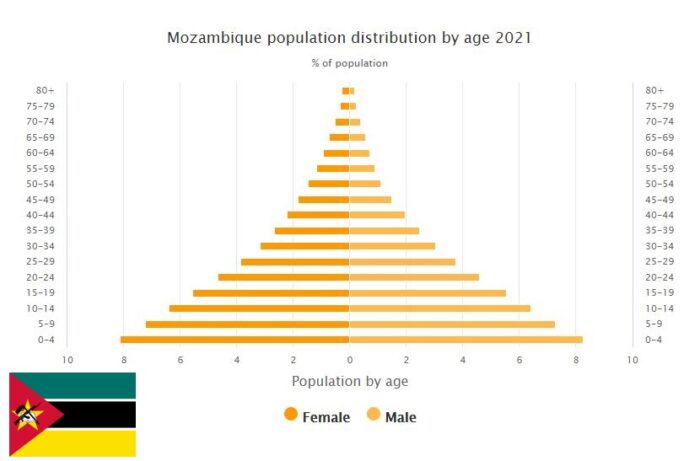 The districts are currently: Lourenço Marques, Sul do Save (Inhambane), Manica and Sofala (Beira), Zambesia (Quelimane), Niassa (Nampula). The main resource is sugar cane, whose modern factories produce from 860 to 950 thousand q. of sugar, and the fruits of the coconut palm are harvested over large areas. The breeding, always rather scarce, marks half a million cattle, 300,000 goats and sheep.