The islands are divided into 4 states, Chuuk, Pohnpei, Kosrae and Yap. The Micronesia Federation is located in an ocean area five times larger than France.

The national anthem of the Micronesia Federation is ‘Patriots of Micronesia’.

The largest island is Pohnpei (formerly Ponape), with the capital Palikir, and makes up almost half of the Micronesia Federation’s land area. Pohnpei, Khosrae (formerly Kosai) and the islands of the Chuuk Lagoon (formerly Truk) are mountainous and of volcanic origin. The other islands are flat coral islands.

The climate is tropical with heat and high humidity throughout the year. There is a lot of rainfall, especially in the east. The area is among those with the most rainfall in the world. The islands are affected by hurricanes (June-December) and drought.

The only native mammals are 6 species of bats. Several mammals have been introduced. There are more than 30 nesting seabird species. In the sea live several whales, 4 sea ​​turtle species and more than 1000 fish species.

In the higher-lying islands there are rainforests and atolls grow palm trees and tropical shrubs. 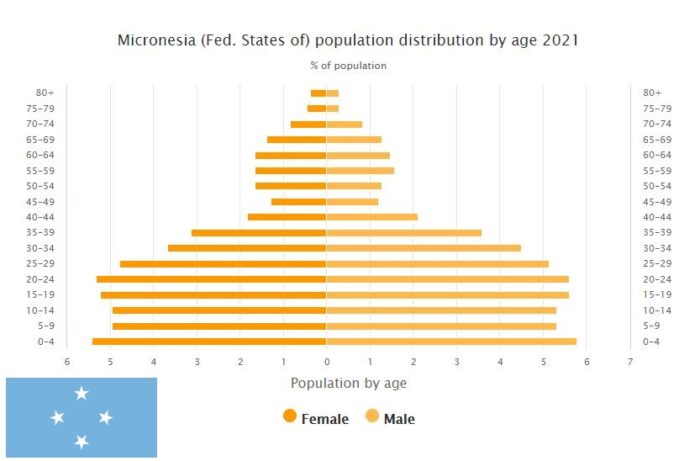