Maldives. The Maldives is one of the LDC countries – the least developed countries in the world – which has noted high growth in recent times. During the period 1985-94, the average increase in gross national income was 6.5% per annum and residents.

The Maldives in the mostly calm Indian Ocean have a very constant warm, tropical climate with high humidity. Temperatures rarely drop below 25 degrees, even at night.

The Maldives is a small state formed by corals and atolls

The population of the Maldives is ethnically mixed; Sinhalese, Indians, Arabs and Africans. The most common religion is Sunnah Islam and there are hundreds of mosques on the islands.

The small islands of the Maldives are relatively barren, so vegetation and with it agriculture is inherently scarce. Of the food plants, coconut palm, banana, sweet potato and a few spices are the most successful.

The reefs surrounding the islands protect Maldivian holiday paradises from tropical storms. The average temperature is approaching 30 degrees, the rainy season is from May to October. Nearly half a million tourists enjoy the Maldives ’stunning sandy beaches, turquoise lagoons, lush palm forests and incredibly colorful undersea world every year. 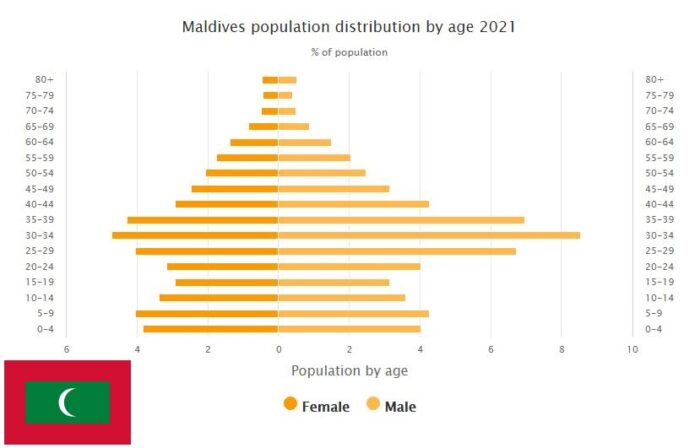