The Mali Empire was one of the major cultural and trade centers in Africa. It was occupied by France in 1850 and, together with the present Burkina Faso (Upper Volta), Benin and Senegal, was converted into French Sudán, later French Central Africa.

The occupation had several violent consequences: The economy was traditionally oriented towards the Mediterranean. It was now oriented towards the Atlantic Ocean, where Dakar was transformed into the colony’s trading center. As a result, traditional trade routes through the Sahara went into disrepair. French Sudan’s anti-colonial currents after World War II were politically manifested in the African Democratic Association (Rassemblement Démocratique Africain, RDA) formed at a conference in Bamako, under the impression of the democratic winds that blew at the end of World War II. The Sudanese Union was the section of the RDA in Mali. As a result of the strategic defeat of French colonialism in Dien Bien Phu in Vietnam and the revolution in Algeria, Paris in the 1950s began to give gradual concessions, which eventually led to the country’s independence in 1960.

The new young states joined in awareness of their own weakness in the Mali Federation, but the different interests made the unification process impossible and the federation collapsed. French Sudan broke the last ties with the center, proclaimed the Republic of Mali and elected Modibo Keita as president.

Together with Senghor in Senegal and Houphouet Boigny in Côte d’Ivoire (Ivory Coast), Keita belonged to a new generation of African leaders, educated in France and inspired by the Social Democracy. But the President of Mali, unlike his closest colleagues, did not confine himself to neo-colonialism under a varnish of ” negritude.” He initiated a process of change and economic development inspired by “African socialism ” and approached the positions of Sekou Touré in Guinea and Kwame N’Krumah in Ghana.

The main economic activities were nationalized and industrialization was encouraged. The school percentage increased from 4 to 20%. His struggle for the unification of the continent, for freedom of alliance and for an independent foreign policy generated respect around Keita among progressive movements throughout Africa. But he failed to develop a stable political structure, and a military coup in 1968 brought him down.

The “National Liberation Military Committee” led by Colonel Moussa Traoré promised to clean up the economy and fight corruption, but the results pointed in the opposite direction. The grain and grain varieties the country could export in 1967 had to be rationed in the 70s.

The economic dependence on foreign countries and the specialization of agricultural production oriented to the international markets led to Mali accumulating a large amount of foreign debt during the 1970s.

In an attempt to create a political playing field, the government in 1974 sent a new constitution to the referendum. With the entire opposition banned and Keita’s supporters thrown in jail, the government got 99.8% support for its constitution – a little too high to be credible. On May 16, 1977, Modibo Keita died somewhere in the desert where he had been held prisoner since 1968. The official cause of death – “food poisoning” – was interpreted by many as: poisoning. The people followed openly despite the regime’s Keita earthly remains to the tomb in the largest demonstration ever conducted in Bamako. 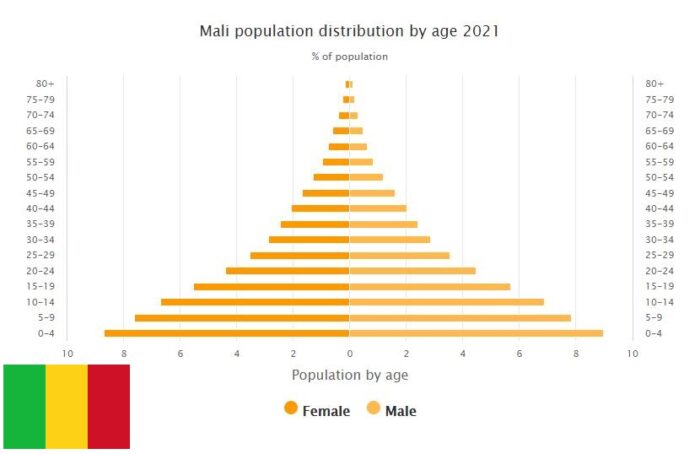