Swaziland. On July 26, the country’s king, Mswati III, appointed Sibusiso Barnabas Dlamini as prime minister. Dlamini, previously a senior official of the International Monetary Fund, had been Minister of Finance in 1984-93. At the same time, Mswati announced that he had appointed a 30-member strong committee with the task of reviewing the country’s constitution.

The measures taken came after a first half of the year, characterized by demonstrations, protests and civil disobedience from the Swaziland trade union’s main organization, SFTU, and the opposition movement PUDEMO (People’s United Democratic Movement). One of the demands of the opposition was the introduction of a multi-party system and the adoption of a constitution with only a symbolic role for the country’s monarch.

In December, King Mswati spent $ 500,000 on the purchase of a Maybach luxury car for his own use. The car has built-in TV, DVD player, refrigerator, telephone and special silver cups to serve champagne in. The king whose lifestyle often triggers fierce criticism had celebrated his 36th birthday with a party that cost around US $ 600,000. In Swaziland, unemployment is 40% and 70% of the population live for less than US $ 1 a day.

A flood of arrests of pro-democracy activists and members of the illegal political parties took place in December 2005 – January 2006. The arrested were accused of holding bombs and carrying out attacks, and many fled abroad for fear of being arrested. Amnesty International accused the government of making arbitrary arrests and of torturing those arrested for making them plead guilty.

In April 2006, Mswati declared that his country was not prepared to allow political parties, and he criticized foreign governments for interfering in Swaziland’s internal affairs. Although the monarch had already withdrawn a royal decree prohibiting political activity in the kingdom, he declared that a recovery of the economy was necessary before parties could be allowed.

According to the Global Research Institute for Freedom of the Press, Freedom House, in 2006 Swaziland was in the group of countries without freedom of the press. According to the institute, the protection of journalists and media workers in the country is almost non-existent. At the same time, there are 32 laws that restrict freedom. For example. there is a ban on journalists reporting on the royal family or subjects the government considers secret.

The first public health study in Swaziland was published in July 2007. It concluded that 26% of the sexually active population is HIV positive. Although the figure than the government’s previous estimate of 38.6%, it places the country in first place worldwide in terms of the spread of the disease.

In August 2008, the government passed a very far-reaching “anti-terrorism law” – the so-called Suppression of Terrorism Act (STA). It gave the state far-reaching powers to implement restrictions on freedom of speech and assembly, as well as severe penalties for violation. Immediately after, the state began to characterize a number of opposition and civil society organizations as “terrorist organizations”. The purpose was to quell the growing dissatisfaction with the kingdom and the economic crisis in the country. The royal house’s extravagant overuse and catastrophic health problems in the form of AIDS/HIV and tuberculosis had thrown the country into a deep social and economic crisis. After several years of increase, the spread of HIV reached 26% in 2011. The highest in the world. Thus, 26% of the population were registered HIV positive. 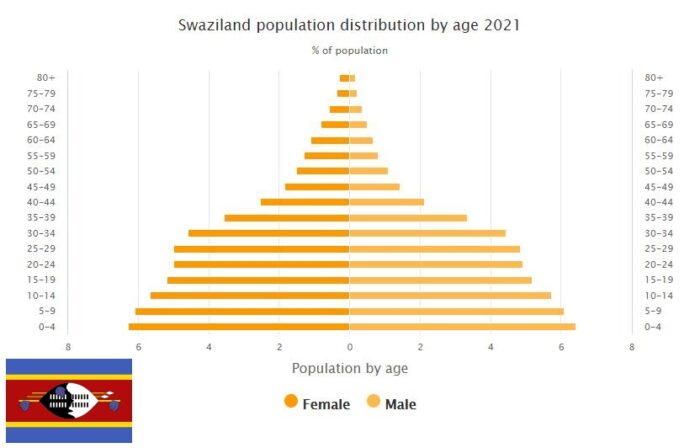