Ethiopia. Ethiopia fought border battles with Islamist guerrillas from Somalia in the middle of the year. The guerrillas have recruited Ethiopians in the province of Ogaden in the eastern part of the country and have long since made raids into Ethiopian territory. According to an agreement signed in October, the country will receive SEK 255 million from Sweden for two and a half years to, among other things, implement economic reforms and support democratic development in the country.

In May and June 95, parliamentary elections were held, this time also being boycotted by the majority of opposition parties. The new federal republic was formally created in August, when Negasso Gidada took over the presidential post. He was a Christian oromo from the Welega region of western Ethiopia. The outgoing president, Meles Zenawi, instead took over the prime minister’s post and the government’s 17 members were carefully selected to reflect the country’s “ethnic balance.”

The trial of representatives from the Mengistu regime was postponed for the second time, and efforts to extradite Mengistu, who had been exiled in Zimbabwe, did not bear fruit. Amnesty International once again criticized the Ethiopian government after the June arrest of 5 opposition politicians.

The government continued the privatization of state-owned enterprises. About 144 were sold in 1995. The production deficit of grain was 1 million tonnes annually. In 96, an attack on Mengistu failed. The majority of his old fellows remained in prison. The rainy season fell off happily, and expectations of self-sufficiency in food increased. The World Bank announced an important write-off of Ethiopia’s debt. In 97 Amnesty International once again requested the release of people from the opposition, demanding the suspension of the random arrests, torture and disappearances.

At the beginning of 98, food shortages threatened millions of Ethiopians. Access to basic goods became increasingly difficult for the most disadvantaged groups in society, as a result of government decrees. Prices had risen 13% in the period August to December 97. The rain was sparse due to climatic changes caused by the El Niño ocean current in the Pacific. The so-called Ethiopian Disaster Prevention Commission formally asked the world community for support to prevent a new famine disaster.

After conflict over the border with Eritrea in May 1998, fighting broke out between the two countries in February 1999. They cost 1,000 people their lives. The UN Security Council passed a resolution calling for immediate ceasefire and called for the cessation of arms sales to the two countries.

In March 1999, US President Bill Clinton proposed to surrender 46 African countries’ foreign debt totaling $ 70 billion. US $. At the same time, the president had put pressure on Congress to approve his “Trade Initiative with Africa.”

In July 1999, the WHO announced that it was implementing a comprehensive polio vaccination program in Asia and Africa – including Ethiopia – in an effort to eradicate this disease by 2001.

In May 2000, heavily armed Ethiopian troops entered Eritrea, capturing 300. Meanwhile, both countries mutually accused each other of initiating the attack. As in 1998, the United Nations Security Council adopted a three-day deadline to put an end to the clashes, and the United States proposed a weapons blockade – which was, however, rejected by Russia. The parties were apparently provided with weapons from the former Soviet republics in Eastern Europe. The UN ultimatum was ignored by the parties and the conflict continued. 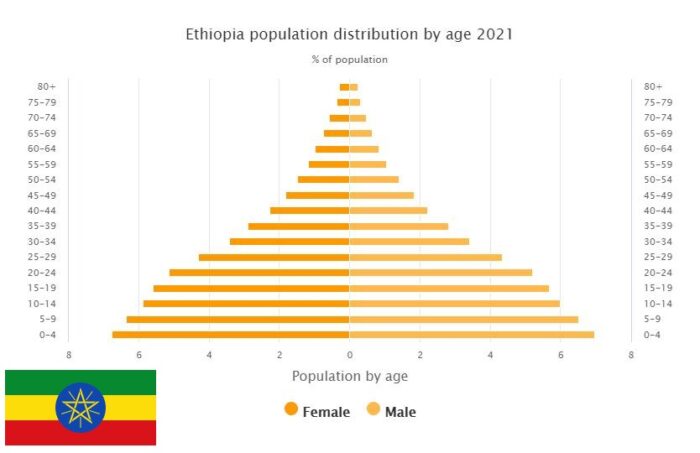