Estonia. At the beginning of 1996, one of the first major investors in Estonia, Svenska Tobaks AB, moved its manufacturing to Sweden after the Estonian government refused to grant the company continued tax privileges. Later, SAS failed to buy into Estonian Air. Instead, Danish Maersk Air joined as a partner in the company. See barblejewelry.com for Estonia sights, UNESCO, climate, and geography.

At the turn of the year, a conflict within the Orthodox Church was raised about who was a legitimate heir to the Church’s assets. The battle was between the Esther and the Russians.

The protracted fishing conflict between Estonia and Latvia in the Gulf of Riga was resolved following negotiations between the heads of government. In June, the Baltic Presidents visited US President Clinton to discuss NATO accession. They made no promises. Later, however, the United States, partly in collaboration with Sweden, worked for Baltic membership in the EU as a kind of compensation and a step on the road.

During the autumn, the Estonian and Russian foreign ministers met in Karelia and reached an oral agreement on the border crossing between the countries. Estonia accepted the border once drawn by Stalin when he separated a few thousand km 2 of land from Estonia that existed during the interwar period.

After the failure of the presidential election in Parliament, an electoral assembly, composed of MPs and representatives of the municipalities, returned Lennart Meri to the presidential post for another five years.

During the autumn, municipal elections were also held, which indirectly also led to a government crisis due to a cooperation agreement that the leading government party Samlingspartiet (Koonderakond) had signed with Center Center (Keskerakond). The Reform Party (Reformierakond) left the government, which continued to govern as a minority minister.

In the election to a constitutional assembly in November 1917, the Bolshevik esters received only 35.5% of the vote. On February 24, 1918, Estonia declared itself independent of the Soviet Union and created a provisional government. The day after German troops occupied Tallinn, and the Estonian government was forced into exile.

After Germany’s defeat in World War I, Estonia’s liberation war began. In February 1919, the Estonians defeated the Red Army, in November a force of German mercenaries and subsequently again the Red Army. With the Tartu Treaty of February 2, 1920, the Soviet Union recognized Estonia’s independence.

Along with Lithaun and Latvia, Estonia joined the League of Nations in 1921. The country got a constitution based on the Swiss model and became a parliamentary democracy. The government initiated the reconstruction of the land and implemented a land reform. In 1920, the country’s first oil refinery was built.

Estonian legislation guaranteed the rights of minorities while the government worked to ensure that all ethnic groups received schools in their own language. The economic crisis of the early 1930’s led to several changes in the country’s constitution from a near dictatorial regime in 1933 to a presidentialist-parliamentary regime in 1937.

Secret documents in the non-attack pact between Germany and Russia – signed by Foreign Ministers Molotov y Ribbentrop in 1939 – stated that the Baltic countries were in the Russian sphere of interest. At the same time, Tallinn signed a mutual assistance agreement with Moscow, allowed the Russians to build naval bases in Estonian territory.

In June 1940, Stalin made an ultimatum to Estonia demanding that Russian troops be allowed into the country following alleged disappearances by soldiers. Estonia rejected the ultimatum and Stalin responded by dismissing the Tallinn government and replacing it with members of the local Communist Party. Following the holding of elections during this occupation, the Communist Party officially assumed power in the country.

Like the neighboring countries of Lithaun and Latvia, the country now adopted the name, Estonia’s Socialist Soviet Republic and allowed itself to be incorporated into the Soviet Union. Acc. the official history of the 3 Baltic States then voluntarily supported the Soviet Union. In 1941, around 60,000 esters were deported to Siberia (see Gulag). 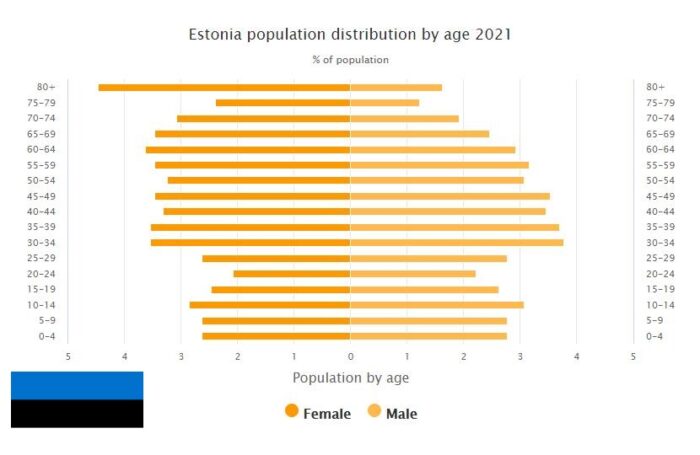