Central African Republic. A tense situation prevailed throughout the year between the president and parts of the army. Soldiers who lacked the privileges of the military dictatorship and complained about missing wages revolted both in April and May. The old colonial power France came to the protection of the government and strengthened the military force of about 1,000 men stationed in the capital Bangui. France’s intervention in May was met by demonstrations against neo-colonial forms, but the uprising was defeated and the mythists promised amnesty and retroactive pay. In total, the two revolts demanded fifty casualties.

President Ange-Félix Patassé appointed a national unity government in June, led by former Paris Ambassador Jean-Paul Ngoupandé, but dissatisfaction persisted and in November a new revolt broke out. Now the mythists openly demanded the departure of the president. The crack in the army has ethnic overtones. The Mysteries mainly belong to the Yakoma people from the southern part of the country, from where the former military presidents came. They accuse Patassé of favoring soldiers from their own ethnic group gbaya from the north. After just over three weeks of fighting, which is believed to have cost hundreds of people their lives, a fragile ceasefire was concluded following the mediation of African heads of state.

In early November, former dictator Jean-Bédel Bokassa, at one time, passed away one of Africa’s most notorious leaders and 1977-79 self-proclaimed emperor. A promised state burial was canceled due to the unrest in the capital.

The climate largely corresponds to that of the alternately humid tropics and in the south the ever-humid tropics. That means there is a wet season and a dry season. In the north, on the border with the dry savannah, the rainy season is around four months long, while in the south it extends over eight to ten months. In the north it is extremely hot, especially in the dry season, sometimes up to 40 ° C. At night, however, it sometimes cools down to below 10 ° C. In the capital, however, the seasonal temperature differences are small due to the proximity to the tropical rainforest. 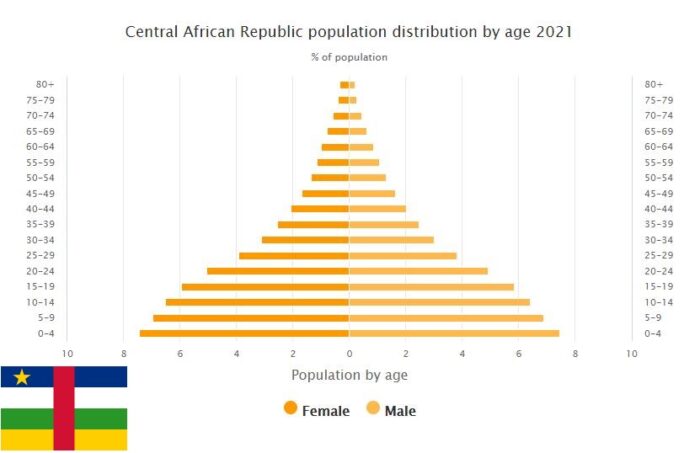 Demography and economic geography. – Internal state of Central Africa. The already difficult conditions of the population (4,709,203 residents, according to an estimate by UNDESA, United Nations Department of Economic and Social Affairs, in 2014), with a life expectancy among the lowest in the world (50.2 years in 2013), have further deteriorated due to the serious political crisis in progress since March 2013 (see below: History). The resulting civil war has taken the situation out of control, especially in the capital Bangui (781,000 residents, according to a 2014 estimate).

In third-last place in the human development index (76% of people in a state of poverty; 4.9% of adults between 15 and 49 years of age with HIV), the Central African Republic counts 603,000 displaced persons and 421,722 refugees, according to an estimate of UNHCR (United Nations High Commissioner for Refugees) of November 2014, of which 57% in Cameroon and the rest in Chad, Democratic Republic of Congo (DRC) and Congo, making explosive a regional context already deteriorated by years of wars (Great Lakes, DRC, Chad, Sudan). An estimated 2.2 million people are dependent on humanitarian aid and thousands of child soldiers have been recruited. In December 2013, the African Union sent a contingent of 5,500 soldiers, while France of 16,000; in September 2014, 12,000 blue helmets arrived as part of the Minusca mission. The collapse of the state was preceded over the years by the progressive disintegration of the formal economy: gold, diamonds, ivory have been the object of systematic predation (by members of the state and armed groups) and corruption is recorded, illicit trafficking and militarized smuggling (including bushmeat, timber, fuel). With the 2013 crisis, GDP recorded −36% (for 2014 the IMF estimated a moderate growth of 1%), revenues halved and public debt doubled.