Cambodia. In the spring, Cambodia’s fragile bipartisan government was close to falling since the royalist party FUNCINPEC’s leader, First Prime Minister Prince Norodom Ranariddh, accused partner Cambodian People’s Party (CPP) of refusing to share high posts abroad. Up until the 1993 UN elections, in which FUNCINPEC was victorious, the born-out Communist CPP had ruled the country alone. Andre Prime Minister Hun Sen, the CPP, dismissed the charge, saying there was no talk of dissolving government or parliament. The parties later promised to continue to cooperate peacefully, but many predicted more squeals before the 1997 elections and the 1998 parliamentary elections.

In the northwest, the war between the Phnom Penh government and the Khmer Rouge (Khmer Rouge) continued. In June, guerrilla leader Pol Pot, the supreme leader of the 1975-79 genocide, was reported to have died in malaria 68 years old. Many people doubted, and the government said they had proof that Pol Pot was still alive.

In contrast, reports of severe fragmentation within the Red Khmer were true. In August, Ieng Sary, Pol Pot’s closest man and, like this one, was sentenced to death in his absence, with two military commanders and their divisions out of guerrillas and began negotiating with the government. As a result, the Red Khmer lost bases Pailin and Phnom Malai and a considerable part of their forces. A month later, Ieng Sary was pardoned by King Norodom Sihanouk on the advice of the government and the National Assembly, and thousands of retired guerrillas began to be integrated into the government army.

Sihanouk himself, a political figurehead for half a century, said in the spring after medical treatment in Beijing that his illnesses had escalated and that his time as head of state could soon be over. The king turned 74 in October.

In Paris, Sihanouk’s exiled half-brother Prince Norodom Sirivudh, convicted of conspiracy against Prime Minister Hun Sen, in December declared his intention to return home soon. Hun Sen replied that if this happens, Sirivudh’s plan will be shot down.

The July 2013 parliamentary elections were a staggering defeat for Hun Sens’s CPP, which lost 22 seats and gained 68. The only other party in parliament was Sam Rainsy’s center-right party CNRP, which received 55 seats. She Sen therefore retained the majority in parliament, but the distance between the two parties diminished drastically. CPP got 48.8% of votes while CNRP got 44.5%. The election results triggered extensive demonstrations in both Cambodia and abroad with allegations of electoral fraud. It was primarily the Western World who wanted to see the right-wing CNRP as victor, while Hun Sen was congratulated by Vietnam for the victory.

The protests against the elections lasted until July 2014. Only then did the CNRP agree to take its seats in parliament and the protests stopped. In January 2014, military police shot and killed 4 textile workers on the outskirts of Phnom Penh. The textile workers were on strike in protest of the government’s unwillingness to raise the minimum wage to US $ 160 per head. month and had earlier in the day thrown stones and bottles at police in protest of previous clashes. The day after, the police stormed the protesters’ camp in the middle of the capital, banning further protests. In February, the ban was lifted. In July, approx. 200 against the government and subsequently gave the outgoing security police a cushion. 8 police officers were injured. 6 of of CNRP ‘ s MPs were arrested and a few days later opposition leader Sam Rainsy returned from a month-long trip in Europe. He met with Hun Sen, a power-sharing agreement was reached, the CNRP decided to take its seats in parliament and the 1-year political crisis was over. The CNRP was chaired by 5 out of 10 parliamentary committees, including the newly created anti-corruption commission. At the same time, Sam Rainsy got or was prevented from running for the seat in parliament.

Despite the adoption of an anti-corruption law in 2010, the country remains one of the world’s most corrupt. As in Denmark, whistle-blowers have no legal protection and can be sentenced to up to 6 months in prison if, for example, reveals corruption.

In August 2014, the UN War Criminal Tribunal in Phnom Penh Khmer Rouge sentenced former head of state 83-year-old Khieu Samphan and the party’s 88-year-old chief ideologist Nuon Chea to life imprisonment for their crimes under the Khmer Rouge regime in the 1970s. The tribunal had begun its judicial proceedings in 2011. Former Foreign Minister Ieng Sary died in 2013 and Pol Pot himself died in 1998, thus avoiding judgment. 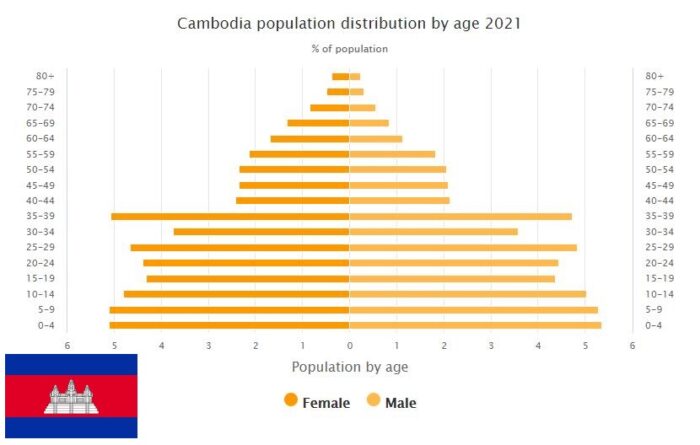