Bosnia and Herzegovina is a country located in Europe according to Abbreviationfinder.org. The cannons were silent in Bosnia and Herzegovina, and the peace agreement’s military part was smoothly executed by the 50,000 troops of the NATO-led peacekeeping force IFOR according to the strict Daytona Agreement timetable, and two-kilometer wide demarcation lines were established between the Muslim-Croat Federation and the Serbs.

According to the Dayton Agreement, Bosnia and Herzegovina was divided into two units: the Muslim-Croat Federation, which got 51% of the country, and the Serbs Republican Srpska, which got the rest. The agreement presupposed that free movement would prevail between the two entities. That did not happen. The demarcation line, which was supposed to be administrative, instead became a state border between the units, and mobility was also restricted within the federation. Nor did the peace mean that refugees could return to their homes in places where they were not in the majority.

According to the UNHCR, at the turn of the year, only about 250,000 of the 2.1 million people who had fled during the war had returned home. The UNHCR stated that 625,000 refugees were scattered in 25 European countries. UN Refugee Commissioner Sadako Ogata warned asylum countries to send the Bosnian refugees to areas where they were in the minority as there was a great risk that they would be persecuted.

A new wave of refugees arose when the Serb-controlled areas in Sarajevo in February and March were handed over to the Muslim-Croat Federation under the Dayton Agreement. Between 50,000 and 100,000 Serbs packed their removals, dug up and took their dead relatives and headed east to Republika Srpska. Only old people, who could not escape, stayed. They became completely dependent on the help of international aid organizations and the Red Cross soup kitchen.

Ethnic cleansing continued, and according to the UNHCR, six months after the Dayton Agreement was signed in Paris on December 14, 1995, 100,000 Bosnians returned home while 90,000 had been displaced. The worst was the UNHCR in northern Bosnia around the Serbian city of Banja Luka, but people were chased away from their homes even within the federation.

In the spring, Peace Coordinator Carl Bildt tried to remove Bosnian Serbs leader Radovan Karadžić, who along with his ÖB, General Ratko Mladić, is charged with war crimes at the UN War Criminal Tribunal in The Hague. This was only partially successful when Karadžić formally surrendered parts of the power to Vice President Biljana Plavšić, an at least as extreme nationalist as he. Karadžić could probably continue to exert great political influence from the backdrop.

However, Karadžić disappeared from public life and at the end of the year resigned Plavšić, who after September’s election became Republika Srpska’s president, Mladić and his closest associates. However, neither Karadžić nor Mladić were disclosed to the Hague Tribunal as the Dayton Treaty provides. Other war criminals also remained at large, which was a major obstacle to peace and reconciliation between the three peoples.

The first elections after the peace agreement were held on June 30 in the divided city of Mostar, which came under EU administration in 1994 after Muslims and Croats had made peace after 13 months of war between themselves and the Muslim-Croat Federation was formed under severe American pressure. The Muslims won the local elections in Mostar, but the Croats referred to electoral fraud, and only after extended negotiations well into August did the parties agree that the city should have a Croatian mayor and a Muslim deputy mayor. However, the Croatians continued to refuse to allow Muslims to return to their homes in Mostar’s western Croat-controlled part.

According to the peace agreement, the Bosnian Croats’ ministry of Herceg-Bosna was to be dissolved and included in the federation. But the resolution was postponed time and time again despite promises by Croatia’s President Franjo Tudjman to exert pressure on Bosnian Croats. In August, US envoy John Kornblum declared that Herceg-Bosna had ceased to exist, but it was still the Croatian currency that prevailed in the ministry and the cars retained their Croatian license plates. Croatian leader Kresimir Zubak claimed in December that the state had now been dismantled.

Parliamentary elections were held on 14 September and ran relatively calm. However, the election campaign was characterized by acts of violence and harassment against opponents of the nationalist parties. The election was won by the three nationalist parties: the Muslim Democratic Action Party, Stranka Democratic Akcije (SDA) with Alija Izetbegović in the lead, Serbian Momčilo Krajišnik’s Serbian Democratic Party, Srpska Democratic Stranka (SDS) and the Croatian Democratic Party, Hrvatska Democratic Party led by Kresimir Zubak. The European Security Organization, the OSCE, which organized the elections, approved them despite the fact that the number of eligible voters was subsequently increased because more votes had been received than there were in the lengths of votes.

Izetbegović received slightly more votes than Krajišnik and thus became chairman of the three-headed presidential council and the country’s president. It proved difficult to persuade the three to cooperate, and it was only in December after tough international pressure that they could agree to appoint the two Prime Ministers of Muslims Haris Silajdžić and Serbian Boro Bosić with the Croatian Neven Tomić as Deputy Prime Minister. The Prime Minister’s post is held for one week at a time by Silajdžić and Bosić, and just before the turn of the year they managed to agree on a government.

The local elections were postponed twice, and in December the OSCE decided that they should take place in 1997. At that time, the Serbs were forced to vote for the displaced to vote in the place where they are located and not in the original place of residence, which will cement the ethnic cleansing.

UN experts investigated mass graves near Srebrenica in eastern Bosnia, where US officials said there would be dust after 2,700 Muslims murdered by the Bosnian Serb arm following the fall of the enclave in July 1995. The experts found just under 200 dead.

In excavations around the cities of Mrkonjić Grad and Sǐpovo in western Bosnia, Serbian experts, under the supervision of the United Nations, found mass graves of just over 200 corpses after Serbs who were reportedly murdered by Croats when they were forced to leave the area they had conquered in the fall of 1995.

IFOR’s mandate expired in December, and its troops were succeeded by a downed force designated SFOR. 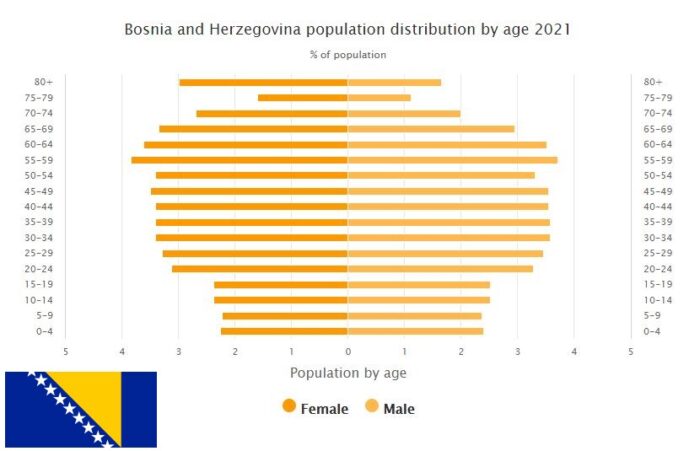