Bolivia. Unrest in the labor market gained momentum in January, when the central organization Central Obrera Boliviana (COB) announced a 24-hour general strike aimed at the government’s austerity policy. Hundreds of workers and peasants were arrested following clashes with police.

At the same time, the government’s efforts were met to prompt the coca growers to move to other crops with hunger strikes and demonstrations. A group of female cocoa growers marched from the Chapare region to La Paz. A second month-long general strike in the spring focused on the sale of the country’s eastern railway to a Chilean company. For two weeks in the fall, La Paz was paralyzed by new strikes and demonstrations, involving over 20,000 Indians. The actions ceased in early October, after the government reached an agreement with Native American leaders on comprehensive land reform.

The International Monetary Fund (IMF) disbursed loans granted to Bolivia during the previous year. In mid-May, President Gonzálo Sánchez de Lozada visited Sweden and had discussions with Prime Minister Göran Persson to elicit support in the fight against drugs.

At the June elections, ADN with 22% of the votes was the largest party followed by MNR, MIR, UCS and Conciencia de Patria respectively. 18, 17, 16 and 16% of the vote. Parliamentary negotiations over the appointment of ADN leader Hugo Banzer to new president were made more difficult by the significant party fragmentation.

The 100 Coca farmers’ associations signed an agreement in August with the government to voluntarily reduce cocoa production to meet US demands, which in turn promised Bolivia $ 40 million to combat drug trafficking. In January 1999, Washington acknowledged that the plan had been successful and that Bolivian coca production had been reduced by 50%.

At the beginning of 1998, the Bánzer government ran into serious difficulties as the COB succeeded in bringing together a broad front aimed at the government consisting not only of workers but also of retailers, farmers, coca farmers and pensioners. The government had suspended the payment of Bonosol – a vital pension contribution to older people over 65, which had been introduced by the Sánchez de Losada government for the funds that had gone into the privatization of 6 large public companies. The MRC warned that the agreement between the government and the private pension companies’ cooperation, AFP, to no longer pay the pension could lead to a social explosion. The COB’s efforts to curb Banzer’s policy continued to be successful in 1999, but internal divisions at the beginning of 2000 weakened the COB and the front.

In the December 1999 local elections, Banzer’s party, ADN, came in third with 13% of the vote. MNR got 19.7% followed by MIR with 14.7%. Yet, the government’s alliance retained power in all the major cities. While 73-year-old Banzer was in the United States for health reasons, his vice president Jorge Quiroga demanded increased support from Washington for the eradication of illegal coca plantations. The government believed that after it had eradicated three-quarters of the coca plantations, it was the United States’ turn to fulfill its part of the deal through funding new crops among the former coca farmers.

According to the human rights organization Human Rights Watch, the drug barons have widespread influence within the government, parliament, the judiciary, the military, the police, the political parties and other public institutions. Drug trafficking prevents Bolivia from developing a public life within the framework of a legal community. The explosive growth in the production of coca in Bolivia over the past 20 years is due to according. human rights organization the rising demand for cocaine in the United States.

In August 2001, Quiroga replaces President Hugo Banzer, who is ill with cancer.

The plan to eradicate the coca plant encounters new obstacles, and in December, farmers reject a government offer of $ 900 annually in compensation per family member for not planting coca. That same month, farmer leader Casimiro Huanca dies after being shot by police trying to dissolve a meeting of coca growers at their association’s premises.

During 1997-2002, Bolivia has become the world’s most successful tropical forest certification country. This opens new markets for Bolivian timber in Europe and the United States. The low extra price of the certified tree can according to. However, analysts are becoming a serious obstacle to the spread of the system and thus the protection of biodiversity in the tropical rainforests.

At the June 2002 presidential election, Sánchez de Lozada received 22.46% of the vote, while Native American leader Evo Morales, who also led the coca farmers, received 20.94%. Since none of them can get an absolute majority, Congress in August decides to appoint Sánchez de Lozada as president. De Lozada has been accused by Morales supporters of having “sold the land” as part of the privatizations during his first presidential term. Upon his accession, he calls on the country’s various political factions for cooperation. 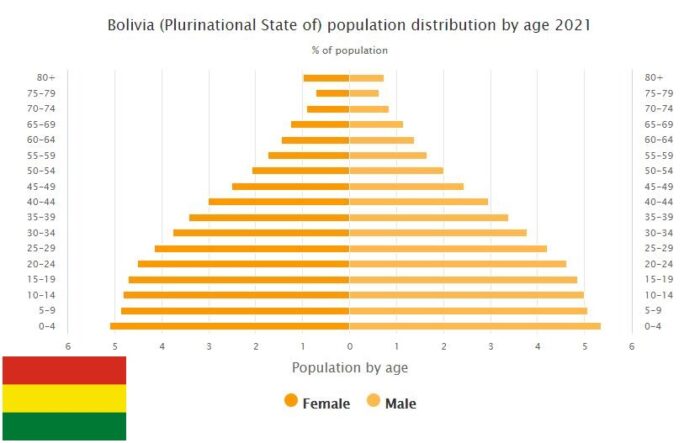