Armenia. Presidential elections were held in Armenia on September 22. The incumbent President Levon Ter-Petrosian was nominated by the Electoral Commission as the winner in the election. He received 51.7% of the vote. Several in the opposition accused the president of electoral fraud, and the European Security Organization, the OSCE, which was responsible for monitoring the election, discovered major irregularities in the vote. They also felt that the presidential election victory could be called into question.

On November 4, Prime Minister Grant Bagratian filed his resignation application. His successor was named Armen Sarkisian, the country’s ambassador to the United Kingdom.

In 1965, Armenians around the world commemorated for the first time the 1915 genocide. In the capital of Armenia, protesters demanded a return of the Nagornij Karabakh area. The first request for reunification of Nagorny Karabakh and Armenia was passed on to Soviet President Nikita Khrushov in May 1963, and was signed by 2,500 residents of the divided area. From then on, two opposite currents developed: in Armenia, where they were supporters of the reunion, and in Azerbadjan, where they were opponents. In 1968, violent clashes between Armenians and Azerbaijanis occurred in Stepanakert, the capital of Nagornij Karabakh.

In connection with the reforms initiated in the Soviet Union in the late 1980’s, the Armenians of Nagorny Karabakh, which constituted 80% of the population, decided by a referendum to be reunited with Armenia. The Karabakh local parliament ratified the request and the resolution met in Armenia with great enthusiasm. Moscow’s reaction was the opposing and Soviet forces brutally suppressed demonstrations in Yerevan and Stepanakert, the capital of Nagorny Karabakh.

The Pan-Armenian National Movement, which won the elections in August 1990, was prepared to seek legal independence. In the September 1991 referendum, 99.3% voted in favor of a separation from the Soviet Union. The Armenian parliament declared the country independent and in October Levon Ter-Petrosan was elected president with 83% of the votes cast.

Nagorny Karabakh was declared independent republic in the same month, after 99% of the electorate voted for a dissolution. Azerbadjan again responded with an economic and military blockade of Nagorny Karabakh that became the start of armed fighting between the two republics. Armenia joined the Alliance Free Nations Organization in December 1991 and became a full member of the United Nations in February 1992.

From early 1993, while pro-Armenian forces achieved significant victories on the Nagorni Karabakh front, Yerevan began to withdraw its unconditional support for the Armenians, at least officially, and in September, Azerbadjan launched a financial blockade of Armenia.

The Armenian economy began to recover in 1994 and 1995, in part because of the good relationship with Iran, which weakened the consequences of the Azerbaijan blockade. In May 1994 – at a time when the Armenian forces, according to the Azerbaijanis, had conquered an area of ​​12,000 km2, the Russian press enabled the conclusion of a ceasefire in Nagorny Karabakh. About 20,000 people had lost their lives during the war, while 1 million had been run away. During 1995 and the first months of 1996, peace negotiations between the warring parties continued.

Despite charges of electoral fraud and violent demonstrations in the streets, Ter-Petrosan began his second term, after being declared the winner of the election, held in September 1996. In August 1997, the governments of Yerevan and Moscow signed a far-reaching political, economic agreement, scientific, cultural and defense cooperation. 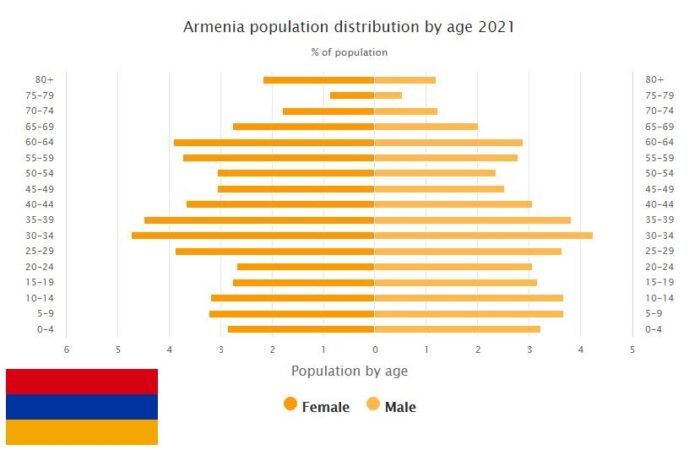