Australia. The bourgeois coalition, made up of the Liberal Party (LP) and the National Party (NP), won the parliamentary election on March 2 and occupied 94 of the 148 seats in the House of Representatives, one of Parliament’s two chambers. The Australian Labor Party (ALP) lost power after ruling the country for thirteen years. New Prime Minister after Labor’s Paul Keating became LP’s leader John Howard, age 56 and a lawyer. Howard had been dismissed as the party’s leader after an internal battle in 1989 but returned in 1995. One of the key issues in the election was whether Australia should remain a monarchy or become a republic. Keating had for a long time pushed the issue of breaking ties with Britain and declaring Australia a republic. Shortly after the election, Keating resigned from the party leadership post, and 46-year-old Kim Beazley took over. He was previously Deputy Prime Minister.

The Northern Territory Supreme Court ruled on July 24 a controversial law that allows active euthanasia. The Australian Medical Association was expected to appeal the verdict.

A riot broke out on August 19 in Australia’s capital Canberra against the government’s planned budget cuts and changes in labor law. About 25,000 union members, residents and students participated. It was the most violent political manifestation in the capital in 21 years.

The rise of the working class

Rapid immigration to the country led to a tripling of the population reaching 1.1 million by 1860, and another ½ million over the following decade. The rapid development created social unrest. The country’s only armed uprising took place in 1854, when gold diggers attempted to sabotage an attempt by the authorities to declare all gold finds for government property. The uprising was broken with gun power and 30 gold diggers were killed. But out of this arose several democratic movements.

The further economic development, i.e. a new “goldrush” in the 1890’s gave rise to the organization of the working class. The first trade unions were organized despite violent repression and countermeasures against strike waves in the 1880’s and 90’s. Among other things, protested against imports of cheap labor from neighboring Pacific regions. Social unrest increased as unemployment rose sharply as a result of the end of the gold adventure. At the same time, there was a rapid migration from the mining districts to the cities, a rapid urbanization, which in turn provided the basis for a rapid industrialization process, especially concentrated around Sydney and Melbourne.

The fighting strengthened the labor movement political arm. Australia’s Workers’ Party was formed in 1891 on the same social democratic basis as its sister parties in Europe. The political party’s political strength increased rapidly as the six former colonies on the Australian continent joined forces in a federation in 1901. During the 19th century, the colonies had become self-governing, and now the colonies were united in a nation following North American pattern. When the federation was formed, 98% of Australia’s residents were descendants of immigrants from the British Isles. One of the first things to do in the new Australian Parliament was to pass a law to ensure that Australia remains “white”. In practice, non-European immigrants were excluded – e.g. through language tests. The law was primarily aimed at the Japanese and had strong racist undertones.

The Australian Workers’ Party was in favor of moderate social reform, which enabled the party to form a government coalition with liberal groups as early as 1904. From 1910 to 1917, the Labor Party had the government power alone. Australia had the highest professional organization percentage in the world during this period, and party and trade union movement were closely linked. A number of social reforms saw the light of day. Along with New Zealand, Australia was among the first countries in the world to grant women the right to vote. That was in 1902. In the labor market, the principle of minimum wage was established. And the industry was protected from high-tariff import goods.

There was widespread political agreement that Australia should join the war in Europe when it broke out in 1914. As Australia was closely linked to the British Empire – i.e. by the fact that the British King was also the King of Australia – the politicians perceived that Australia was automatically involved in the war through the British declaration of war against Germany. Over 400,000 Australians volunteered in the war. 60,000 of them lost their lives. A quarter of a million were wounded on battlefields thousands of miles off Australia’s shores. As the war went on, however, skepticism developed and a proposal for forced military service was twice rejected by referendums. The skepticism was strong on the left wing of the Labor Party. The cost of war slowed social reforms. The cost of living increased by 50% from 1914 to 1919. Strikes were hard hit. From The United States brought syndicalist thoughts through the ” Industrial Workers of the World “. The revolution in Russia in 1917 also created aftermaths in Australia. The Labor Party split and lost the elections in 1917. Some of the right-wing outbursts had joined forces with liberals and formed a Nationalist Party that won the election. The Labor Party did not regain government power until 1929. By then, Australia had endured several years of social unrest, falling real wages, repression of strikes and rising unemployment. Australia was hard hit by the world depression because the economy was so dependent on exports of goods from the primary industries and prices of these goods fell sharply.

The Communist Party of Australia had been formed in the early 1920’s. The members were active in the trade union movement, but the party did not reach the barricade at the elections. The ideological debate in Australia was poor and, in addition, anti-communism was strong. from those parts of the Labor Party that had a Roman Catholic background, especially from Ireland. But the social and political turmoil led to a new split in the Labor Party, which lost the election in 1931. The same year, the minimum wage was reduced by 10%. Unemployment had risen to over 25% in 1933, but now the world economy was reversing.

Australia almost automatically joined the Allies when World War II broke out. Australian forces participated in Europe and the Middle East. Only when Japan joined the war did Australians get it closer to life. This was especially true when Singapore fell in 1942 and when Australia’s northernmost city of Darwin was bombed by the Japanese two months later. Australia did not face actual invasion, but US General MacArthur’s brought the war closer as he relocated his headquarters to Melbourne.

However, the war was far more important economically and socially. The industry was faced with major tasks, labor was routed to places where it was needed, and rationing was introduced. By the time the Labor Party had come together and had regained government power in 1941, the changes could happen in close cooperation with the trade union movement. The women suddenly became significant. From being children and housewives, they were now in demand – both in the industry and as aides in the armed forces. The Communist Party was banned in 1940 as a result of its anti-war agitation. The ban was maintained, even as the party changed its attitude following Hitler’s attack on the Soviet Union in 1941. However, as in other Western countries, joining the party increased during the war. In 1939 the party membership was 5,000. By 1945, it had quadrupled. 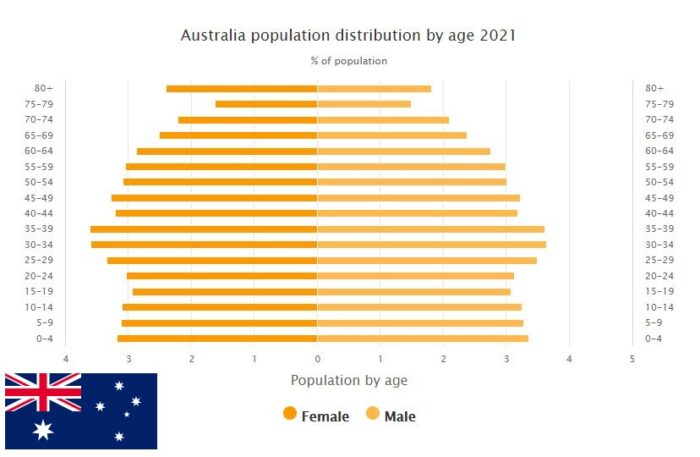