Yemen. President Ali Abdullah Saleh appointed on January 14, Abd ar-Rahman Muhammad Ali Uthman as new Minister of Supply and Transport after Muhammad Ahmad Afandi, who resigned in December the year before. Afandi belongs to the party Islah, which is a coalition of conservative tribal chiefs and Islamic fundamentalists and is the smaller of the two government parties. The new minister was taken from the country’s largest party, the People’s Congress (GPC).

Prime Minister Abd al-Aziz Abd al-Ghani presented a new five-year plan for the country’s economic development until July 2000 to Parliament. The plan aims at an annual increase in gross domestic product of 7.2%. On March 20, the International Monetary Fund granted Yemen a US $ 193 million loan for the government’s economic and financial reform program 1996-97.

Relations with Saudi Arabia improved, and on July 27, the two countries signed a security agreement on cooperation against smuggling and other crime along the border. The government decided on July 29 to withdraw troops from the disputed border area to Oman.

On April 27, 1997, the People’s General Congress won the parliamentary elections when it got 187 out of 301 seats. It was followed by the Islamist Islah with 53. After a lengthy internal debate, the Socialist Party had decided to boycott the election.

On May 15, new Prime Minister Faraj Said Ibn Ghanem formed the government with 28 ministers – including 24 from the General Congress. On the same day, the government devised a structural adjustment program aimed at boosting the economy, which continued to suffer from the effects of the civil war and the reduced assistance of a number of Western and Arab countries. The economic reforms – especially the privatizations – raised loans from the World Bank and the IMF.

Acc. In 1998, Amnesty International was one of the 5 countries in the world that still used the death penalty against criminal minors. The other countries are: Iran, Pakistan, Saudi Arabia and the United States.

In May 1998, Abdel Karim al-Iriani was appointed prime minister. A post he also had in 1980-83 in Northern Yemen. Saudi attacks on a Yemeni barracks on Duwaima Island in the Red Sea in July again worsened relations between the two countries. In October, the International Court of Justice in The Hague ruled in favor of Yemen on the issue of the Hanish Islands, which Eritrea also claimed.

The September 1999 general election was won by Ali Abdullah Saleh, who was re-elected with 96.3% of the vote.

The abduction of 28 tourists – predominantly British – in December 1998 seriously questioned the methods used by some clans to submit their claims to the central authorities. The abductions had become almost everyday occurrences to secure the government’s attention and make it bow to local demands. During the 1990s, about 200 tourists or executives of British or North American companies were abducted for this purpose. In February 2000, therefore, a new law was passed imposing the death penalty for the abduction of foreigners. A month later, a group of Poland’s ambassador to Yemen abducted. However, he was released 4 days later.

Seventeen North American Marines were killed in a suicide attack on the US warship USS Cole in the Port of Aden in October 2000. The Islamic fundamentalist, Osama bin Laden, who is Saudi but of Yemeni descent was made responsible for the attack. That same month, a bomb exploded in the British embassy. Four Yemenites were arrested after declaring that they carried out the attack in solidarity with the Palestinian cause.

The climate in Yemen is very different depending on the region. The country can be divided into three different climate zones, the coastal region, the mountains and the highlands.The islands and the coastal plainare hot and humid and overall very little precipitation (Aden: January mean 25 ° C, June mean 33 ° C, 40 mm annual precipitation). Here the humidity is very high at 60 to 85 percent all year round. Precipitation is extremely low all year round and is usually only between 25 mm and 150 mm, which is equivalent to 5 to 15 rainy days a year. In the winter half of the year it is very warm, with 19 to 23 ° C at night and 28 to 31 ° C during the day. The summers are often unbearably hot due to the high humidity and daytime temperatures of 34 to 38 ° C and more. In addition, the night values ​​usually do not drop below 26 ° C, and there are often even periods of tropical nights with consistently above 30 ° C. A phenomenon on the coasts is not infrequent morning fog, which the hot sun rays soon clear.

The mountains occupy more than a third of the country and is characterized by the main mountain range of Al-Sarat. This mountain region knows many, very densely populated basins, which are consistently at an altitude of 1500 to 2500 meters. The climate here is very mild for the region. The winters are dry and characterized by high temperature fluctuations: at night it often cools down to almost freezing point (0 to 4 ° C), while during the day the warming rays of the sun ensure pleasant values ​​(22 to 24 ° C). The summer is moderately humid, which mainly benefits agriculture. The highest rainfall is recorded in the Yemeni mountains. In some areas it rains up to 50 days a year (200 to 700 mm), with the focus of precipitation in the period between March and August. On rainy days it is a little cooler, otherwise the daytime temperatures rise to 26 to 30 ° C, but in the nights it remains at rather subdued values ​​of 9 to 13 ° C. The humidity is medium year-round and levels out at around 40 percent.The climate in the highlands is largely dry all year round (5 to 25 rainy days). The winters are mild, but subject to large temperature fluctuations (23 to 28 ° C during the day, 0 to 6 ° C at night), the summers are relatively hot with daily values ​​around 36 ° C, followed by cool nights (10 to 16 ° C). At the edges of the desert, values ​​of 45 ° C are not uncommon. The air is rather dry all year round (25 to 45 percent). 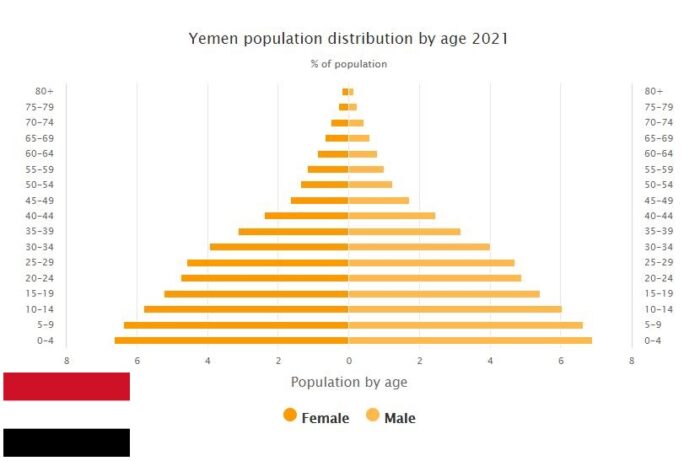