Solomon Islands. The government’s unwillingness to regulate forest harvesting continued to create controversy in the country. The murder of an anti-fencing activist on the island of Pavuvu in January, and the police’s inability to conduct an in-depth investigation of the case, led to speculation that an official conspiracy was behind the act. Intensive logging on the island of Mono caused both islanders and landowners to protest. Due to the seemingly uncontrolled impact on the islands, the Australian government announced that it intended to reduce financial aid to the country by $ 2.2 million a year.

In May, opposition leader Sir Baddeley resigned. He was replaced by Ezekiel Alebua, leader of the newly formed National Party.

In September, Prime Minister Solomon Mamaloni reformed his government. The total number of ministers was reduced from 19 to 17, according to financial reasons, and there were changes in five ministerial posts.

In September, it was also reported that the former postal and communications minister would be charged with corruption charges. Before him, four current or former ministers were awaiting trial on charges of corruption. 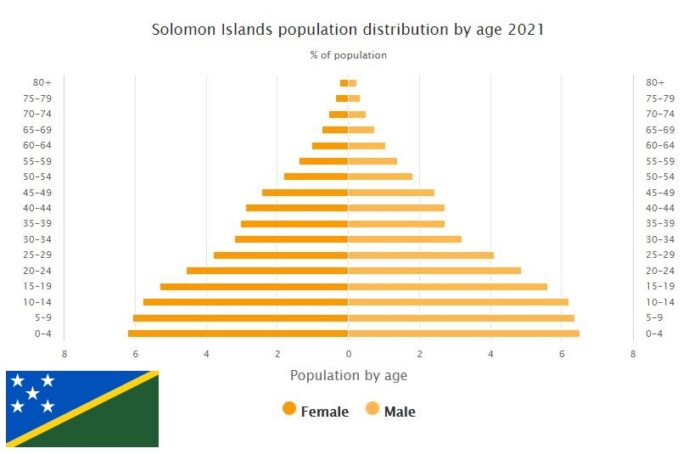 The population (417. 000 residents According to an estimate of 1998) has marked an increase of 46 % compared to the census 1986. Such consistent growth is mainly due to the largely positive natural balance: in 1997 the birth rate and the mortality were, respectively, of 36, 2 ‰ and 4, 1 ‰. The only urban center in the capital, Honiara, on the island of Guadalcanal (43. 600 residents In 1996); destination of conspicuous internal migrations as it offers better job opportunities, but does not have sufficient infrastructures to support the demographic pressure.

The economy of the islands is mainly based on the primary sector and in particular on forest exploitation and fishing, while only 2 % of the land area is used for agricultural crops. However, forests and woods have been over-exploited and it is estimated that resources will run out at current rates within fifteen years; Also the fishing level (53. 275 t in 1996, equal to 130 kg per capita) is higher than what the natural repopulation of the exploitation area would allow. Among the main crops, in addition to traditional subsistence products (especially sweet potatoes), palm oil, copra, coffee and cocoa, some of which are exported. The mineral resources of the islands (lead, zinc, nickel) are only partially exploited and the exploration of submarine oil and gas deposits has not yet begun, while in 1998 a gold-mining project was initiated in the central section of Guadalcanal Island. Manufacturing activities are very limited and tourism, a potential resource of the local economy, is compromised by a series of problems, including inadequate accommodation and transport infrastructures and the endemic presence of malaria. To make up for the lack of energy, a hydroelectric plant is being planned on the island of Guadalcanal.