Mongolia. After 75 years of communist rule, there was a regime change in the parliamentary elections in June. The Reformed Communists of the Mongolian Revolutionary Party (Mongol Ardyn Chuvisgalt Nam) had managed to retain power in the free elections in 1992, but were now given only 25 of the 76 seats in Parliament. Victory made an alliance of two opposition parties, the Mongolian Democratic Union (Mongolyn ardtjilsan cholboo evsel), which received 50 seats. The new Prime Minister was appointed Democratic Unionist Mendsajhanij Enhsajhan, an economist who was previously Chief of Staff to President Punsalmaagijn Otjirbat.

The new government had to take over a country in an economic crisis so deep that the largest commercial bank, the half-state-owned People’s Bank, had to be closed after losing nearly SEK 200 million. The economic situation was further aggravated by the hundreds of fires that devastated large parts of the country during the spring and early summer. More than 100,000 square kilometers of forest and cultivation land were destroyed, and large numbers of livestock fell. 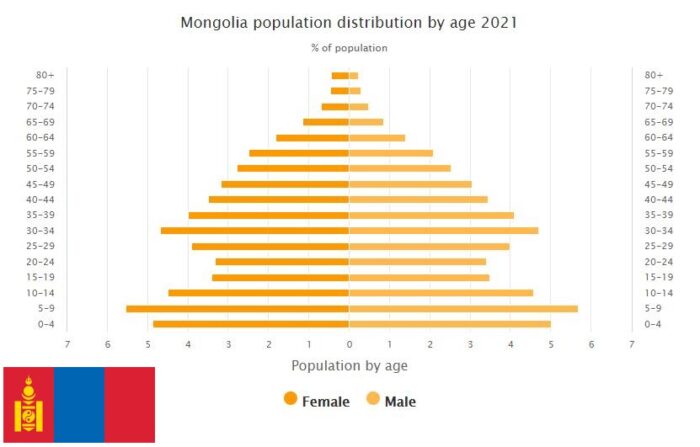 The Mongolian population amounts to approximately 2.8 million people. About another 3.4 million Mongols live in China, in the Inner Mongolia Autonomous Region, and about half a million in Russia. The density is very low (1.9 residents / km 2) and the population is mainly urban (71.2%), while in the countryside the population is partly semi-nomadic. The typical Mongolian family lives in traditional nomadic tents called ger. Most of the population is ethnic Mongolian (90%), mostly from the Khalkha group, but there are Kazakh, Russian and Chinese minorities.

Until 1911 Tibetan Buddhism was the predominant religion and the monks represented one of the most influential groups in Mongolian society. Alongside Buddhism, the old shamanism, the original religion of the Mongols, survived. Under the Communist regime, freedom of religion was limited, but since the 1990s the number of believers – Buddhists and, to a lesser extent, Christians – has started to grow again. Religious freedom is now enshrined in the Constitution and the most significant religious minority is represented by the Kazakhs of the Sunni Muslim religion (5%), who live in the western region of the country. In December 2015, parliament, with a historic vote, abolished the death penalty. While in communist times education and health were financed by the state, now they are also provided by private individuals. The level of literacy, already quite high in the communist era, it is now 98.3% and constantly growing. The school attendance rate in 2013 was also good (94.7%).