Greece. The severely ill Prime Minister Andreas Papandreou was forced to resign in January. He was replaced somewhat surprisingly by his sharpest critic in the Pan-Dutch socialist movement (Panellinion Socialistikon Kinima, PASOK), Kostas Simitis. He had left the government a few months earlier in protest against Papandreou’s policies, but now won the vote within the party.

Simitis had barely taken office until Greece got into a serious conflict with the enemy Turkey over the ownership of an uninhabited islet in the Aegean, called Imia in Greek and Kardak in Turkish. The UN and NATO tried to mediate when warships from both countries became dangerously close to each other and there was a war atmosphere. Following the intervention of US President Bill Clinton, the vessels were withdrawn. Greece, however, continued the conflict by blocking EU aid and a loan from the European Investment Bank totaling more than SEK 9 billion. to Turkey.

At the end of June, Papandreou passed away and was followed to the grave by tens of thousands of followers. However, his colorful leadership style was already a thing of the past, and after the election of Simitis as party leader, PASOK was given a new look. Simitis pledged to quickly adapt G. to the EU and received support for its policy in a quickly announced new election in September, more than a year earlier than intended. PASOK’s victory over the conservative New Democrat (Nea Dimokratia) became quite scarce as a percentage of votes but superior in terms of mandate due to the design of the electoral system. After all, there was widespread opposition to the harsh austerity measures that the EU alignment would entail, as evidenced by the fact that the three small left parties that most clearly opposed these austerity measures were the only ones besides the two dominant parties that passed the three-percent blockade to Parliament.

The budget presented at the end of November was described as the tightest in 15 years and entailed large reductions in central government expenditure, but also large tax increases for high-income and self-employed persons. The budget was met by angry protests from mainly farmers, who for a large part of December blocked roads and railways in central Greece to get through their financial demands on the government, which however failed.

In February 2000, Konstantinos Stefanopulos was re-elected as President of Greece. He thus became the first president to regain confidence. PASOK won the parliamentary elections in April and Kostas Simitis continued as prime minister.

Greece became a member of the Economic and Monetary Union in Europe (EMU) in 2001 and thus part of the Eurozone. In 2002, Greece went from drachma to euro, but it would prove to be difficult to integrate Greece into the EU internal market. Greece has also had difficulties implementing directives and orders from the EU, and the country has great difficulty in approaching the criteria for membership in the monetary and economic union.

Bomb explosions and assassination attempts have been a major problem in Greece for several years. After September 11, 2001, political pressure against the authorities increased to fight the dissident groups. In 2002, a number of people from the November 17 group and the revolutionary ELA were arrested. This led to a dramatic reduction in the number of attacks.

In 2002, peace negotiations were underway between the parties in Cyprus, which both Turkey and Greece supported. But the negotiations were stranded, which threatened relations between the states. The UN came on track in 2004, and a plan was put forward by Secretary General Kofi Annan. The Turkish part of the island supported the plan, but the Greek Cypriot rejected it. The political environment in Greece was positive to the plan as it would provide both security and financial benefits for the state.

Greece signed the EU’s new constitution in 2004. The Greek government rejected a demand from the opposition for a referendum on the law. It was justified by the tradition in Greece that the Constitution could be ratified in the National Assembly, as did about half of the EU states.

The March 2004 parliamentary elections were considered one of the most important elections since the fall of the military junta in 1974. PASOK, who had been in power for 19 of the last 22 years, could lose. The reunification talks in Cyprus led to tensions in Greek society, and in addition Greece was to host the Olympics in August, which was of great importance for the country’s international reputation.

PASOK lost the election and had to hand over power to the conservative party New Democracy. Kostas Karamanlis became new prime minister. He is the nephew of the prime minister who led Greece out of the military dictatorship. Karamanlis’ counterpart was PASOK’s Georgios A. Papandreou, son and grandson of former prime ministers.

Athens hosted the Summer Olympic Games in 2004, but the state had major problems getting the facilities completed on time. When Prime Minister Karamanlis appointed the new government, he appointed himself Minister of Culture and thus took personal responsibility for the Olympic facilities. PASOK supported Karamanlis in the work, which ensured broad political support to solve the problems.

The Olympic Summer Games were used as a pretext to make major improvements to Athens’ infrastructure. The new international airport, named after former Prime Minister Eleftherios Venizelos, opened in 2001 and the metro lines were expanded to better cope with a growing number of tourists in addition to guests and participants of the Olympics.

The 2004 Olympics cost more than Greece had budgeted for. The Greek economy was in decline. In November 2004, Greece admitted to cheating with the numbers to achieve EMU membership in 2001. 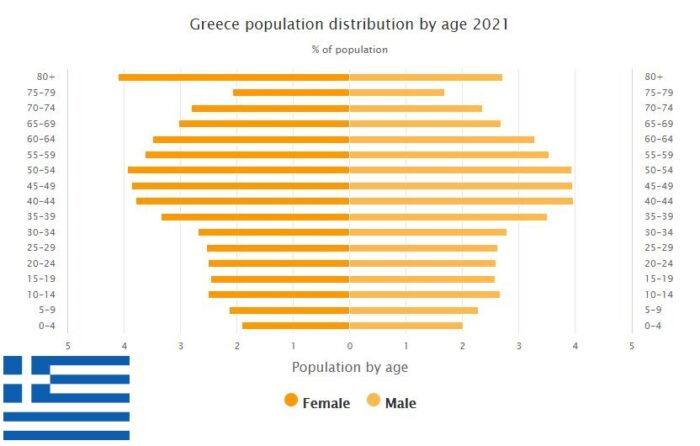