Djibouti. On March 10, the fourth political party in the country was formed through the legalization of the Front for the Restoration of Unity and Democracy (Front pour la restoration de l’unité et de la democracy, FRUD), made up of representatives of Afar, one of the two major ethnic groups. the groups in the country. The Constitution allows only four parties.

The country’s police chief, General Yacin Yabeh Galab, tried in December 2000 to conduct a coup d’etat, but the coup failed. After one year in prison for conspiracy against the state, he was released to escape medical treatment for his diabetes. In May 2001, the government and the most radical faction of FRUD entered into an agreement to end the civil war, and Ahmad Dini returned to Djibouti after 9 years in exile.

As a positive step towards FRUD, Guelleh transformed his government, but despite previous speculation, the new government did not include a single representative of FRUD.

In January 2002, the United States began building a base for terrorism in Djibouti. Its area of ​​responsibility was the entire African Horn. The government got 31 million US $ to make its territory available for this purpose. The base was the starting point for North American attacks on Somalia in 2007 and is believed to be part of the superpower’s torture program, where suspects are held in secret prisons and subjected to torture.

In September 2002, the 1992 law was known to be obsolete, allowing only 3 political parties to stand against the ruling party. A process towards a multi-party system was thus initiated. Although the opposition parties are now formally allowed to operate in the country, the government has very little tolerance with the parties or individuals who criticize its political hegemony. That same month, the Djibouti government stressed that it would not allow its territory to be used as a base for attacks on other countries in the region. At this time, 900 soldiers from the United States were installed in the superpower’s anti-terror base in the country, and the declaration by the government was a distance from the US preparations for war against Iraq.

At the January 2003 parliamentary elections, the coalition (UMP) supported the incumbent President, Omar Guelleh. These were the first multi-party elections since independence in 1977. The UMP got 62.7% of the vote, but because of the electoral system, the coalition got all seats in parliament.

In May 2003, an agreement was reached between France and Djibouti to increase the rental amount from DKK 20 to 34 million. US $ for the base area where 2,700 French soldiers are stationed. 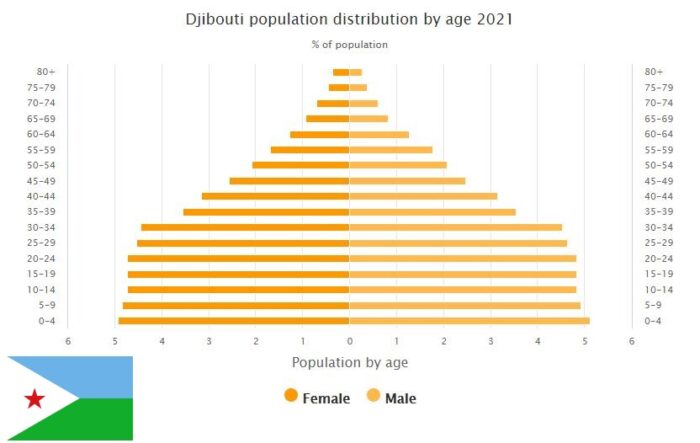