The Mossi introduced from the 11th century their supremacy over the other population groups inhabiting the area where the Volta Rivers originated.

In the two following centuries several well-structured kingdoms were founded. The most important were Yatenga and Ouagadougou. the regents of the latter group were elected from among the members of the royal family of four officials – with the rank of ministers – tasked with striking a suitable balance between the mossi nobility and the man population. This electoral system was maintained until the 20th century.

The Mossi and the Mani resisted the “integration attempts” of the Mali and Songhi empires, as well as the invasions of the Fulani in the 18th and 19th centuries.

The French invaded with repeated military expeditions the central steppes between 1895 and 1904; with ransacked houses and executed people and animals in the aftermath, the French succeeded in establishing a terrorist regime that was maintained until a major uprising broke out in 1916. The subsequent repression forced millions of burkinaires to emigrate, mainly to Ghana.

The Upper Volta – today Burkina Faso – was led by a military government until 1919. That year, Burkina was incorporated into the Upper Senegal-Niger colony; then it became a separate colony. Even later, the country simply disappeared, but re-established, to finally – in 1960 – be able to declare itself within the framework of the neo-colonialist strategy of the French.

The international division of labor left no specific production for Upper Volta. Its task was to produce manpower for the hard work of the Ivory Coast plantations or to provide the French army cannon fodder for the wars in Europe or in the colonies.

The first free elections in the new independent republic were held in 1960 and became a victory for Volta’s Democratic Union, a party financed by traders and landowners. Maurice Yameogo was elected President. The Democratic Union and its candidates were re-elected in 1965, in the midst of a major campaign, launched by trade unions against widespread corruption. Army Chief General Sangoulo Lamizana took power one year later in a coup d’état.

The 1970s marked a decade of endless coups, followed by elections followed by re-elections, all more or less dishonest – and all dictated by Colonel Laminaza. Everything took place within the context of famine, which led to a massive human flight to neighboring states. It affected 25% of the population.

After a new coup, Colonel Sage Zerbo assumed power. Later, in 1982, the same system brought the doctor Jean-Baptiste Oudraogo to power, who was subsequently ousted by a younger officer, Thomas Sankara, who was particularly popular with the soldiers and peasants for his efforts in the fight against corruption and for his organizational experience in the relief work in connection with the repeated drought disasters.

At the end of Sankara’s first reign, the country was renamed Burkina Faso, “The Land of Worthy People.” The national anthem was sung in an African language and agricultural reform was initiated. People’s courts and democratic political institutions were formed. As head of the National Revolutionary Council, Sankara had set a goal for every inhabitant to have access to 2 meals and 10 liters of clean drinking water daily.

Achieving these results would present a greater challenge for a country where 82% of the adult population is illiterate and living in extreme poverty. In Burkina there is virtually no savings, the population uses petroleum as a light source and uses firewood for energy sources in the homes – it is estimated that between 50,000 and 100,000 hectares of forest is used for ignition. The drought periods in the Sahel aggravate the lack of ignition wood.

In 1987, Sankara was deposed, convicted and executed with 12 of his employees. He was followed by a government official, Blaise Compaoré, who claimed to continue as leader of the People’s Front, but with certain “regulations” of the regime.

In contrast to Sankara’s complacency, Compaoré built a government palace, had its own private aircraft, and launched an economic strategy that was open to private initiative and foreign investment, introducing the privatization efforts in line with the demands of international financial organizations.

Since November 1987, the political opposition has organized itself into smaller groups, of which the People’s and Democratic Union stands out by demanding freedom to organize itself professionally, amnesty for the political prisoners and holding free elections, while the Burkina Workers’ Revolutionary Party claims the cause to the fall of Sankara, was due to his campaign turned against the corruption.

In September, four senior military personnel were executed, accused of planning an attack on the head of state.

In December 1992 and in March 1993, major general strikes were faced with the IMF’s structural adjustment programs . The devaluation of the CFA franc in January 1994 caused Prime Minister Ouedraogo to resign and he was replaced by Marc-Christian Kaboré in March of that year. Despite the opposition protests, Parliament passed a law allowing the privatization of 16 national companies.

The opposition boycotted the municipal elections in February 1995, accusing the electoral commission of not being truly independent. The ruling party The Organization for the People’s Democracy-Labor Movement captured power in 26 of the 33 most important cities. At the social level, the situation continued to be tense due to the indirect consequences of the devaluation in 1994 which caused a 30% increase in living costs in the first half of 1995.

The government continued its economic liberalization and officially led the country into the World Trade Organization (WTO) in June 1995. A restructuring program of the recently privatized Burkina Railway, which included had resulted in layoffs of 500 employees, the launch of new strikes that reflected the country’s social crisis.

The economy grew by 5% in 1996. In June, the IMF approved a new $ 57 million loan to facilitate the introduction of the structural adjustment program, which will run over the next 3 years. A drought disaster in 1997 that decimated the country’s food production left Burkina in a critical situation. The lack of agricultural production, which accounts for 32% of the gross domestic product and employs 90% of the population, was estimated at 156,000 tonnes for the period 1997-1998. In December 1997, Ouagadougou saw the need to call on the international community for food aid of 67,000 tonnes of cereals to alleviate the crisis. 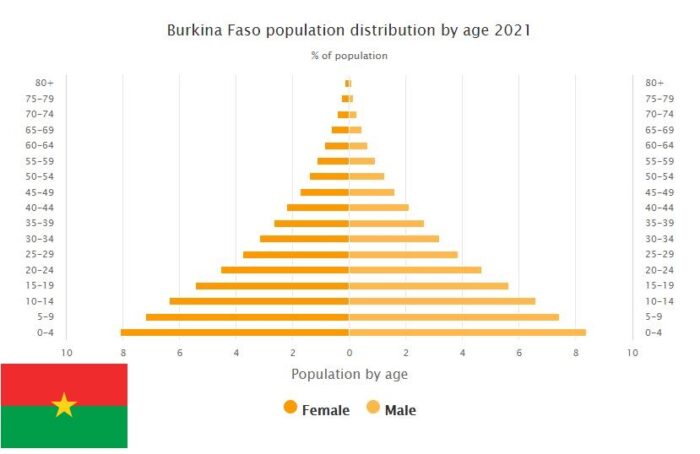