Belarus. President Aljaksandr Lukashenka’s disagreement with Belarus’s parliament and opposition culminated in a disputed referendum in November. When the president announced at the beginning of the year that his country would go into union with the Russian Federation, it aroused concern and wonder. Tens of thousands of people marched through Minsk on protest trains, while Kazakhstan, already in customs union with the Russian Federation and Belarus, questioned the purpose of the new union. That did not prevent Lukashenka, together with President Boris Yeltsin, to sign the April 2 union agreement in Moscow. Both sides emphasized that the Union was not a fusion, but merely a deep integration.

In Minsk, however, the protests against the Union and the president’s intrinsic stubbornness continued. On April 26, the 10th anniversary of the Chernobyl accident, 50,000 people defied the demonstration ban. New mass actions in the following weeks were met with heavy-handed by the police, and several members of the nationalist Belarussian front were arrested. People’s Front leader Zenon Poznjak and his spokesman fled to the United States during the summer and received political asylum there.

After the opposition accused the president of imposing dictatorship, Lukashenka, who, despite the protests and severely restricted press and freedom of expression, received support both in the countryside and in Moscow, said he wanted to allow the people to vote on a changed constitution, including extended term of office and greatly increased power for the President at Parliament’s expense. In the November 24 referendum, 70% of voters said yes to the proposals, which gave Lukashenka broad powers to enforce changes at his own discretion. The European Security Organization, the OSCE, refused to accept the vote, citing the president’s stern control of the media and election apparatus. But he went ahead, dissolved the old parliament and installed a new lower house with just over a hundred hand-picked members.

Minsk, capital of Belarus; 1.8 million residents (2009). The city is located on a ridge central to the country and is intersected by the river Svislatj. Minsk was almost wiped out during World War II, and the modern city stands as a model example of Soviet urban planning. The city center is located on the river, and from this a large coherent park system is based. Residential and industrial areas are separated into rings around the city center. Especially in the summer, the parks, the many trees and the river give the city its own charm. Minsk’s subway is from the 1980’s; the most recent extension was opened in 2001. For geological reasons, the courses are just a few meters below the city.

Minsk is Belarus’s cultural, industrial and traffic center. The university dates from 1923 and there are opera and theaters. The industry includes car, tractor (Belarus, which is exported to Denmark, among others) and the food industry, but after independence in 1991 it went back to the economy.

Minsk is first mentioned in the sources in 1067. From 1100-t. was the city center of an independent principality, but in 1413 this became part of the Grand Principality of Lithuania. In 1499, Minsk gained Magdeburg city rights, and in the 1500’s. the city developed into an important commercial and cultural center. At the second division of Poland in 1793, Minsk was incorporated into Russia. In 1898, the Russian Social Democratic Workers’ Party Congress was held in the city. On 5.1.1919 Minsk became the capital of the Belarusian SSR. The city was occupied by the Germans 28.6.1941-3.7.1944. By the liberation, 80% of the city was destroyed. 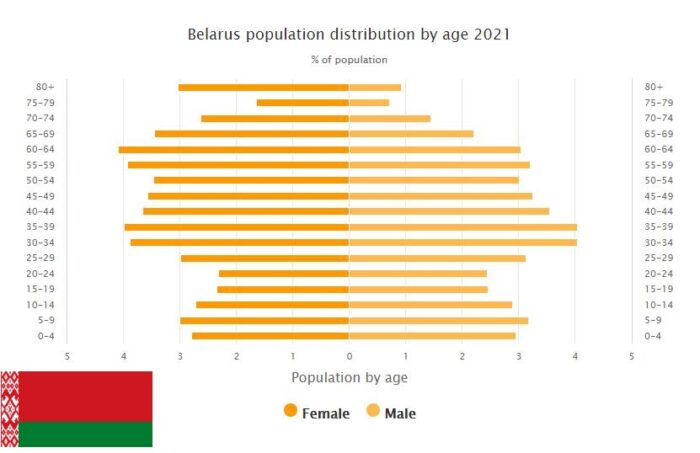