Bangladesh. For more than a year, the opposition had demanded re-election to Parliament, citing the ruling party’s cheating in the 1994 general elections. The opposition boycotted the election and only about ten percent of the voters participated. The ruling Nationalist Party, Bangladesh Jatiyatabadi Dal, got the most seats, but the election was judged by both the opposition and foreign observers. The election campaign and the election day itself were characterized by violence.

The opposition’s continued strikes and disobedience campaign crippled the country, and in March, Prime Minister Khaleda Zia was forced to allow Parliament to change the constitution so that the president could appoint an interim government. Khaleda resigned and an unpolitical ministry was appointed. Another new election was announced until June 12.

Three weeks before the election, the country seemed threatened by a military coup. Soldiers supporting a General Mohammad Nasim marched against Dhaka, but loyal troops protected the president and defeated the coup attempt. What intentions Nasim had never fully stated. It may have been a personal revenge as he was recently dismissed by the president for disciplinary reasons, but rumors of his association with either political camp quickly came into circulation.

The new election could then be carried out according to the plans in June and this time under quieter forms. The turnout was high, about 74%. The leading opposition party, the People’s Union, Awami League, received almost half of the mandate and was able to form a government with the support of former military dictator Ershad’s national party, Jatiya Dal. The general election in September gave the League of Nations its own majority. The new Prime Minister Hasina Wajed is the daughter of the nation’s founder Mujibur Rahman. Through her election victory, the People’s Union, which brought the country to independence, returned to office after 21 years.

In July, Supreme Court President Shahabuddin Ahmed was elected President. He was nominated by the League of Nations and had no counter-candidates.

The climate of Bangladesh is tropical with increasing rainfall from west to east. Bangladesh is in the area of ​​influence of the southwest monsoon, so that an average of 1,500 to 2,250 mm of annual precipitation is reached. In the east, at the foot of the Tripura Lushai Mountains, 3,000 to 4,000 mm fall (see Chittagong climate diagram). The Mowdok Mual is the highest point in Bangladesh (1003 m). More than half of the annual precipitation falls from June to August. In March / April and October there are frequent tropical cyclones over the Bay of Bengal, which often have catastrophic consequences as the associated floods inundate large parts of the country. 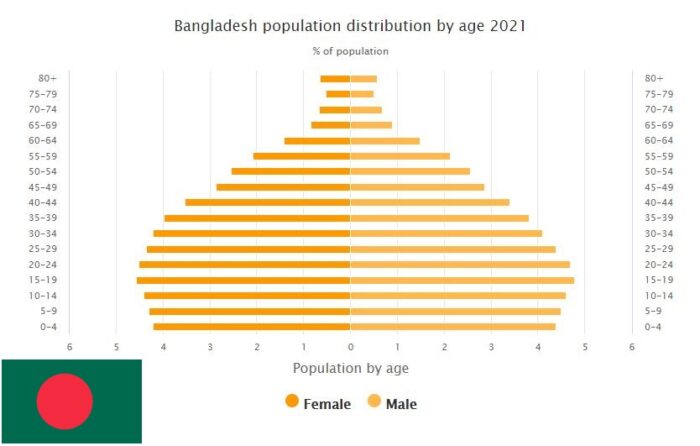 Bangladesh’s economy largely depends on the agricultural sector, which accounts for around 16% of the total gross domestic product but employs half of the active population. The agricultural sector is set to grow further at an average annual rate of 3.7% in the five-year period 2013-17, compared to 4.2% in the previous period.

About two thirds of Bangladesh’s territory is used for cultivation: jute, tea, rice and mustard are the main Bengali agricultural products. However, the agricultural sector suffers from two deficits: a marked fragmentation of land ownership and a particularly irregular water regime, characterized by severe drought during the hottest season and ruinous precipitations that often produce devastating floods in the rainy season.

The manufacturing sector is dominated by the production of clothing. It is a sector in constant growth, which in the last twenty years has seen the proliferation of numerous small and medium-sized enterprises, engaged in the export of those textile products (including mainly prepackaged items) which represent the first item of national exports., especially towards the European and US markets. The protection of workers is extremely low, as seen on the occasion of the collapse of a factory in Dhaka, in April 2013, which caused more than a thousand deaths among workers and led to the closure of 200 plants at risk.

In recent years, Bangladesh’s GDP has grown at rates close to 6%: a positive result in line, for the most part, with that of the other main countries in the region. GDP growth will continue to be driven by services and industry: the first sector contributes around 56% of GDP, while the second represents around 28%.

Still relevant is the percentage of the population living below the subsistence threshold: the ability to harmonize and spread the effects of the growth of the national economy remains one of the main challenges that the Dhaka government will have to face in the near future.

Finally, the question of remittances is fundamental for the country’s macroeconomic stability. Over the last two decades, the number of Bangladeshi citizens working abroad has increased dramatically, from 70,000 in the mid-1980s to more than 4 million today. An important number that generates a constant influx of remittances every year, which in 2013 amounted to almost 14 billion dollars – more than 10% of the Bengali GDP. These remittances come mainly from Middle Eastern countries (primarily Saudi Arabia), the US and some European countries.

Bangladesh has very close commercial relations with the European Union (Eu), in particular with Germany, the United Kingdom and France: if the trade volumes of the 28 member countries are aggregated, the Eu is the country’s first trading partner., absorbing around half of its exports. About 20% of exports are destined for the USA while from the point of view of imports the first two partners are China and India, which represent almost a third of Bengali imports.

Bangladesh is also present in global and regional cooperation mechanisms: it has been a member of the World Trade Organization (WTO) since its foundation and has been a major proponent of the South Asian Association for Regional Cooperation (Saarc).