Vietnam. On the surface, everything seems calm, but within the ruling Communist Party there are strong contradictions. The party does not know how it should relate to the forces it unleashed when it gave the market forces almost free space ten years ago. Growth is still 8-9% per annum, but in 1996, foreign investment decreased markedly for the first time since the reform policy was introduced.

Parliament began to improve the investment laws, which were criticized for obscurity and arbitrariness, but at the same time campaigned against the foreign detrimental impact that is said to accompany economic liberalization and which has led to juvenile delinquency, drug abuse and prostitution. The party praises the free market, but at the same time planned at this year’s congress to increase the state control of the economy again. In the Politburo, the party’s highest body, the military and security services strengthened their position at the expense of reformists. Communist parties must be set up in all foreign-funded companies “to help them on the right path”.

Vietnam as a French colony

Just as the Chinese Empire did not survive the clash with Western imperialism, the Vietnamese system of society also succumbed to the clash with France. But while China never lost its political independence, Vietnam was colonized. The southern part of Vietnam – Cochinkina – became an actual French colony, while the central part (Anam) and North Vietnam (Tongkin) became protectorates. This difference had less political and economic significance.

The conquest of Vietnam began in 1860 under Napoleon III, and encountered only spontaneous, disorganized and poorly armed resistance. Still, the French were 3 decades to finally defeat this resistance. To remove the Chinese cultural influence, the French introduced ” quoc ngu ” – a Vietnamese written language with Latin letters. In doing so, they also provided the nationalists with a strong tool for popularizing knowledge and for restoring national culture. The written language became easier to learn and the printing costs lower than the Chinese written language used up to that point.

The background of colonialization was that French capitalism needed raw materials and new markets. The development that took place under the colonial rule was aimed solely at promoting French interests. This was the case with the rubber plantations as well as mining and food production. There was hardly any industry built up. The large profits the French reaped were not reinvested in the Vietnamese business community. French investment was concentrated on production for export.

With the construction of irrigation facilities, the rice area was quadrupled in the period 1880-1930, but most of the Vietnamese at the same time their nutritional standards deteriorated. The new land was not distributed among the landless peasants, but went to the French and a small group of wealthy Vietnamese who cooperated with the French. In this way, a class of Vietnamese landlords grew and they gradually strengthened their power by the smaller peasants often getting into financial difficulties and consequently having to pledge their land to the rich peasants.

This development was particularly evident in the southern part. In Cochinkina, 2.5% of the population owned 45% of the land, the small farmers who made up 70% owned only 15% of the land. The landless peasants made up 50% of the population before World War II. Forced labor was commonplace and working conditions in the mines and on the rubber plantations were so inhumane that this was objected to in the French National Assembly, but without much improved conditions.

Due to poverty, Vietnam never became a major market for French export goods. The purchasing power population was limited to the French and the 7,000 Vietnamese landlords.

A limited consumer goods industry such as breweries and cement and textile factories was developed, but the Vietnamese were kept out of the modern sector and export and import as well as retail trade. These sectors were reserved for the French and lower-level Chinese. In 1930, the total number of workers in industry and mining was approx. 100,000.

The administrative positions were reserved for the French, but some of the lower positions gradually became occupied with Vietnamese. In 1939, only 15% of Vietnamese children had any form of schooling, and 80% of the population were illiterate. This was in stark contrast to the pre-colonial period, as the majority of the population possessed some literacy and literacy. In 1939, there were 700 Vietnamese students out of a population of 20 million. The Vietnamese population was not only economically depleted during the colonial period. It was also set back culturally.

During the colonial period, the Catholic Church spread its influence. It is estimated that after World War II there were 2-3 million Catholics in Vietnam. This became very important after the world war.

The capitalist system that accompanied the colonial power became a foreign element in Vietnam, and capitalism was associated with foreign oppression. The French never created any truly domestic capitalist class. 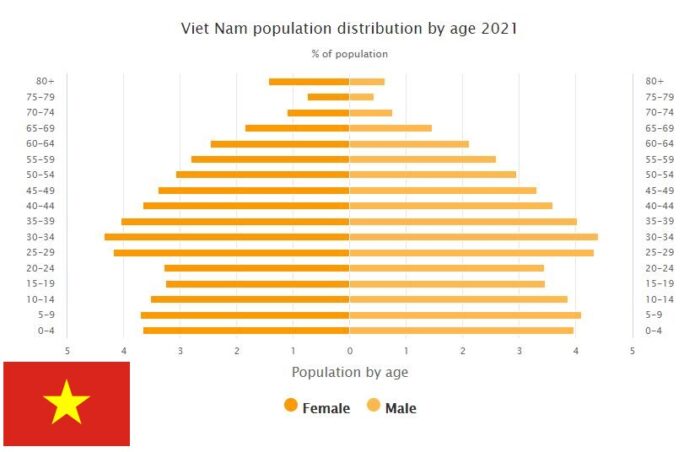