Poland. Poland’s economic success continued in 1996. The country is the EU’s largest trading partner in Central and Eastern Europe and the economic engine of the post-communist states. A paradox is that those who forced the system change, e.g. the shipyard workers in Gdańsk, became unemployed while many of the old oppressors established themselves as successful businessmen and politicians.

During the year, Poland became a member of the OECD, an important step in the approach to Western European conditions. For the red-green coalition government, membership of the EU and NATO are also the most important foreign policy goals. In November, during a visit to Finland, Prime Minister Cimoszewicz was asked by a journalist which is most important, the EU or NATO? The Polish Prime Minister responded ironically: – It’s kind of like asking a child, who do you like best, mom or dad?

In the November 1995 presidential election, Lech Wałęsa was beaten by Aleksander Kwaśniewski, who got 51.7 percent of the vote in the second round. Kwaśniewski had the greatest support among younger voters and in the countryside, Wałęsa among older voters and in the big cities. At its inauguration in December, the new president promised to work for a unified Poland, continued reforms and Polish membership in NATO and the EU. In 1996, Włodzimierż Cimoszewicz took over as prime minister.

In 1997, after a long battle, a new constitution was passed that gave the president a somewhat weaker power. The parliamentary elections that year were won by Solidarity’s election campaign (AWS) with 34 percent of the vote. The election result led to the formation of a right / center government with Solidarity’s Jerzy Buzek as prime minister.

At the 2000 presidential election, Aleksander Kwaśniewski was re-elected in the first round for a new 5-year term with 53.9 percent of the vote.

Economically, Poland quickly gained a reputation as a pioneering country in the transition from a stagnant socialist economy to a dynamic capitalist one. Already in 1992, the gross domestic product began to grow cautiously, and later in the 1990s, growth became substantial. But after several years of growth, Poland was hit by recession, and unemployment rose to 18 percent in 2002. After the 2001 election, the left side regained a majority in parliament, while the election alliance Solidarity lost its influence. Leszek Miller became new prime minister. He implemented an economic reform program which was a prerequisite for Poland to join the EU. Miller eventually lost a lot of confidence, both because of high unemployment and after allegations of corruption.

In March 2004, a party from the left union SLD broke out of the government and formed a new Social Democratic Party (SdPl). The outcasts also threw Prime Minister Leszek Miller. He resigned on May 2, the day after Poland joined the EU. The partyless Marek Belka became new prime minister, but he was not approved by parliament until June. Belka’s minority government was weak and had to repeatedly request parliamentary statements of confidence.

The government succeeded in reducing poverty in the country, but at the same time unemployment remained high. The almost permanent government crisis continued until the ordinary parliamentary elections and new presidential elections in the autumn of 2005.

Since Poland joined the first group of new members in the EU on the eastward enlargement on 1 May 2004, Poland has become a key player in EU cooperation.

Thanks to a policy based on financial stability and a robust banking sector, Poland fared better through the financial crisis than most other EU countries. Thus, from 2008 to 2012, the country had the strongest economic growth of all EU countries. Unemployment fell from 17.7 percent in 2005 to 9.8 percent at year-end 2015/2016. This development must also be seen in the context of the fact that almost two million Poles took up employment in other EU / EEA countries during this period, see the article Poland’s population.

On June 4, 2014, an international event was held in Warsaw with the participation of a number of heads of state and government to mark that it was 25 years since the 1989 elections and that it was in Poland “the fall of communism”. 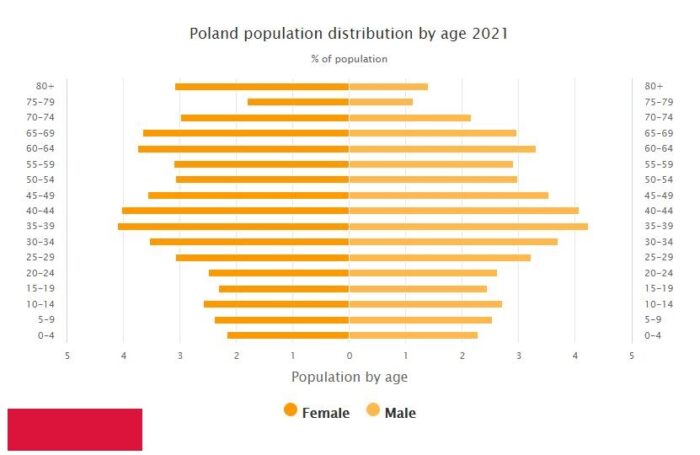