Netherlands. The changing political and military situation in Europe has consequences in many different areas. In the Netherlands, in 1996 it led to the abolition of the general military duty. The Armed Forces have gradually been given other tasks and are now mainly focused on peacekeeping efforts. The young people who will not be doing their military service in the future, like everywhere else in Europe, will enter a tough labor market. See sunglassestracker.com for Netherlands territory.

The government initiated early cuts in the very generous welfare system, and the social partners contributed to the development of a division of labor with high flexibility. The benefits of this were clearly shown in 1996. Economic growth was relatively good, and open unemployment fell in 1996 to just over 8%. The aircraft manufacturer Fokker’s bankruptcy, which entailed the release of more than 5,500 people, therefore did not lead to any acute crisis. The government has also been able to implement substantial cuts in public spending and reduce the budget deficit. The Netherlands is thus one of the countries expected to meet the requirements for membership of the Economic and Monetary Union EMU 1999.

After increasing pressure from neighboring countries, Parliament decided to tighten up some of the extremely liberal drug legislation. The number of cafes that have the right to sell marijuana should be reduced to 1,000 and the amount that may be sold is reduced from 30 to 5 grams per person.

The expansion of land and population created an increase in not only agriculture but also trade. In the new cities, classes emerged striving for autonomy. The merchants had taken oaths of cooperation to preserve law and order. The cities were gradually transformed into independent centers with the power to enter into commercial, political or military agreements with other cities or with the prince. The city owned its own area and its citizens did not depend on outside authorities.

In the second half of the 14th century, the Burgundians dominated the dukes – the French royal house of Valois – a large part of the Netherlands and sought to form a centralized state. A movement in 1477 attempted to curb this centralization, but the rise of the Habsburgs to power destroyed the attempt. The fate of the Netherlands depended on the Austrian royal house’s struggle for hegemony over Europe. The centralization tendency grew stronger and also included the church, which by papal regulation created an administration directly from Rome with 3 archbishops and 15 bishops, however strongly opposed by the local nobility.

Lutherans and Baptists had difficulty penetrating into the Netherlands, while Calvinism quickly gained support in the popular strata and among the intellectuals. The repression sent many Calvinists into exile, but they nevertheless had a significant influence on the rebellion in 1567 against the monarchy. The popular dissatisfaction with the miserable conditions and the harsh taxation of the Spanish royal house was reconciled with the wishes of the nobility and the citizenship of autonomy. The rebellion was led by Willem of Oranje, and first prevailed in the Netherlands, and after the defeat of the Spanish troops it spread to all provinces until in 1576 a peace treaty was signed in Ghent.

For geographical, economic, political and religious reasons, three years later, problems with the preservation of the Union arose. In 1579 the Arras Union was established in the south and the Utrecht union in the north – within the framework of the Superior States. The Utrecht Union declared itself a Unity State in 1581, and with it the supremacy was deprived of the Spanish king Felipe II. As the Netherlands was the strongest economic and political force in the Union, the citizens of the new state began to be called Dutch.

During the 12 years ceasefire with Spain (1609-1621), the controversy within the Union worsened. Participation in the war between the province of Holland and the Orange House developed into fierce rivalry. In addition, the disagreement and the relationship between state and church. In 1618 Maurice of Orange, with the support of the Superior States, had the head of the most important party in Holland executed. When the ceasefire ended, the war against Spain was resumed, forcing both rivals to reconcile themselves to the Utrecht peace in 1713.

The 17th century is called the Dutch Golden Age because the Netherlands was at the center of events. In the field of science and art, the country was also at the forefront. Well-known names from the period are the painter Rembrandt, the philosopher Spinoza and the scientist Huygens. An important prerequisite for this was that the Netherlands was the only European country with almost complete freedom of religion – even though Calvinism was state religion and Catholics were discriminated against. 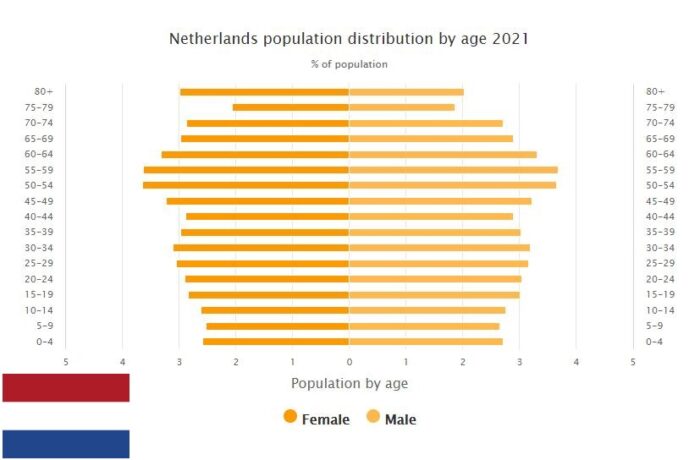