Libya. The opposition in Libya made itself known during a football match in July in Tripoli by shouting slogans against the country’s leader Muammar al-Khadaffi. About 20 people were shot to death by the bodyguard of al-Khadaffi’s sons who visited the match.

In August, Muslim militants attacked the Benghazi military base, killing 25 militants. The military responded with a bomb attack against Muslim bases, killing 150.

The US-Libya conflict continued during the year, and in May the US government threatened to bomb a site where, according to US sources, a chemical weapons plant was being built. A spokesman for the US Department of Defense announced that there were detailed plans to attack military targets in Libya unless Muammar al-Khadaffi gave way to international opinion and stopped the project. Libyan sources rejected the allegations, claiming the facility was a training ground for workers participating in a project aimed at “building” a river through the desert.

The US maintained its position with continued trade and aircrew boycotts against Libya. The attitude was strongly criticized by the EU. At a G7 meeting in Brussels in early July, EU Commission President Jacques Santer declared that US economic sanctions legislation against Cuba and similar legislative proposals against Iran and Libya violated World Trade Organization rules on world trade. During the meeting, President Bill Clinton acknowledged that the laws could create trade policy barriers.

The European Commission decided later in July to prepare trade policy measures against the United States. Since the US government in August passed the so-called d’Amato law – which prohibits investment in gas and oil projects in Iran and Libya – the Commission has filed a formal protest with the United States.

The US government sought to prevent Louis Farrakhan, the leader of the African-American activist organization Nation of Islam, from visiting Tripoli to receive al-Khadaffi’s prize for human rights efforts and a $ 1 billion donation. Farrakhan stated that the donation was $ 250,000, money he received in Tripoli in August.

Turkish Prime Minister Necmettin Erbakan visited Tripoli in the fall and promised increased trade between Libya and Turkey if Libya paid its debts. Erbakan came to the Tripoli country road as the international aviation boycott against Libya continued throughout 1996. His visit was heavily criticized by political opponents in his home country.

Parallel to the weakening of the Byzantine Empire, an Arab expansion began, driven by the spread of the new religion of Islam from the Arabian Peninsula. The Arabs entered, and conquered, Kyrenaika in 642 without significant Byzantine resistance. Tripoli was then taken in the following year, and control of Tripolitania quickly established. Fezzan was first invaded in 663. After some resistance from the Berber tribes, the Arabs in 670 had subjugated all Roman possession in North Africa. The area was under the Caliphate of Damascus; then, from 750, under the Caliphate in Baghdad. After a rebellion against the Baghdad caliphate, Libya from the year 800 was ruled from Qairawan (Tunisia) – with extensive autonomy, to be subject to the Fatimids from the 10th century caliphate in Cairo; the Fatimids took control of Tripoli in 910. From the 1100s to the 1500s, Tripolitania and Fezzan were subject to the rulers of Tunisia; Kyrenaika was located under Cairo. This was a downturn for Libya, where agriculture was decaying and the cities – with the exception of Tripoli – were relocated.

Islam spread rapidly, displacing Christianity, which in practice disappeared. While the population embraced Islam, the cultural Arabization – with the introduction of Arabic language – took longer. Arab ethnic dominance also took a long time to develop, but it was gradually strengthened through increased relations between Arabs and Berbers, including through marriage. Inland, the Berber maintained its culture and way of life.

Arab control over the coast was hardly challenged in the Middle Ages. One exception was the conquest of Tripoli, carried out by Normans from Sicily in 1146, led by Georg of Antioch, after in 1087 they had recaptured Sicily from the Arabs, and then taken Malta. The Norman leader Roger 2 took the title King of Africa and controlled the coast from Tripoli to Algeria. His successor lost control of the Muslim almohads from Morocco, who were welcomed as liberators in 1160, after Tripoli’s revolt against the European Christian rulers in 1158.

Kyrenaika was still ruled by the Fatimids in Egypt, then the Seldom, while Fezzan was more or less self-governing. Trade was maintained with both Europe and Africa, and the city of Genoa established a trading monopoly in Kyrenaika in the 13th century. Venice set up trade routes to Tripoli. The Genovese stormed Tripoli in 1335, while North African pirates carried looting on the coast of Italy and against ship traffic in the Mediterranean.

In the 15th century, the area was invaded from the Iberian Peninsula, and a Spanish force landed at Tripoli in 1510. It defeated the Arab resistance, and the destroyed city was then ruled from Spanish Sicily and used as a naval base. The Johannite order in Malta was given control of Tripoli in 1530, in order to defend it on behalf of Christianity – as a bastion against the advancing Muslim Turks. Unlike Spain, which failed to create any North African kingdom, the Turkish Ottomans advanced and conquered ever larger areas, including Egypt in 1517 – and from there Libya. 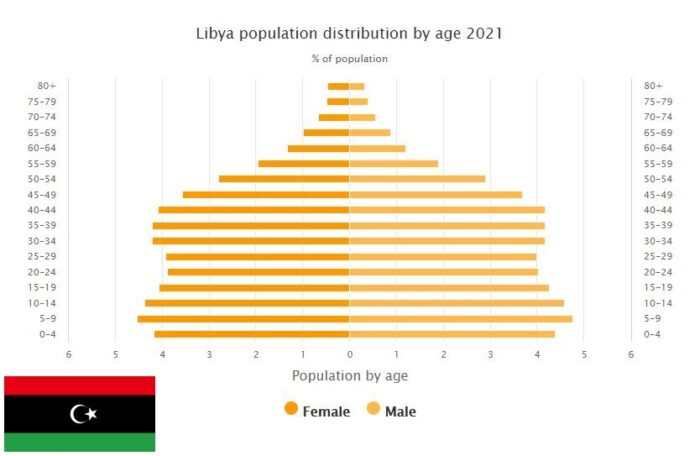