Kuwait. Parliamentary elections were held October 7; only about 107,000 men from families who have lived in the country since 1920 had the right to vote. Because political parties are banned, the distribution of the 50 seats in the National Assembly to political trends in the country became difficult to interpret. However, the election resulted in a majority for loyalist politicians and a decline for liberal and Islamic candidates. After the election, emir Jabir al-Ahmad as-Sabah reappointed the country’s crown prince, Sad al-Abd Allah as-Salim as-Sabah, as prime minister. The 66-year-old crown prince has been head of government since 1978. A week before the election, about 300 women conducted a sit-down strike at the law firm’s premises to demand female suffrage.

On March 18, 1991, Amnesty International in London criticized the “arbitrary arrests and the use of torture” made by Kuwaiti soldiers and civilians against special Palestinians in Kuwait.

In March, US Secretary of State James Baker visited the country and Prime Minister Sheik Saad al-Abdallah promised on that occasion that democracy would be reinstated and parliament reopened, but without setting a timetable.

A few days later, Kuwaiti citizens signed a call for freedom of the press, independence in the judiciary, legalization of the political parties and steps towards corruption.

On April 8, the emir stated that elections would be held for a new National Assembly “whenever the situation permits”, without setting a date. Various reports indicated that there was considerable dissatisfaction among the people with the emir being so long to return home and with his political plans.

In June 1991, sheik Jaber al-Sabah convened a national council to discuss elections, as well as the issues of women’s suffrage and foreign nationals in Kuwait. The opposition continued to demand the reintroduction of the 1962 constitution and the creation of a democratically elected parliament. None of the opposition leaders were given the opportunity to join the emir national council.

Over 1,000 people demonstrated in the capital’s streets as the emir’s decision became known. Although public demonstrations were banned, the government did not intervene to impede the march.

When the war ended, the emir launched the slogan of “re-Kuwaitization” of Kuwait. He even proposed drastically reducing the number of foreign nationals in the country. Over 800,000 people, according to the sheikh’s plans, would be forced to leave the country. A minority was deported, but the majority were forced to travel as it became impossible to find work or school space for their children.

In mid-December 1991, Saudi Arabia, the United Arab Emirates (UAE), Oman, Qatar, Bahrain, and Kuwait met for a summit to establish a collective security mechanism and establish a new security agreement for the area, where 40% of the world’s oil reserves are located. In the first months of 1992, a new meeting was held to bring the details into place.

After resuming oil production, Kuwait accepted a production quota of 2 million barrels daily, but by February 1993, the country had clashed with the other members of OPEC and decided to increase production to 2.16 million. The country’s oil minister explained that new oil reserves had been discovered in the “neutral zone” at the border with Saudi Arabia.

In January, the press censorship was lifted. The women’s organizations demonstrated for the right to vote, and finally, on October 5, elections to the National Assembly were held. It was won by the independent opposition groups which got a total of 31 seats. the fundamentalists got 19 and the liberals 12. For the first time in the country’s history, a government was appointed that had ministers who were popularly elected.

Despite protests from Baghdad, in 1993 the UN finally marked the border between Kuwait and Iraq. In response to repeated Iraqi troop incursions, the United States conducted a series of bomb attacks against the country (see Iraq). At the same time, Washington decided to install missiles in Kuwait, and construction of a 130-kilometer-long wall, with 1.3 million mines, was underway along the new border.

In August, the former head of the Pro-Iraqi Provisional Government, Al-Hussein Ali was sentenced to death along with 5 other Kuwaitians and 10 Jordanians (Palestinians) who were accused of cooperating with the Iraqi occupation forces.

In 1994, several members of the top Kuwaiti leadership were accused of corruption. In April, Oil Minister Ali Ahmad al-Baghli was ousted by the government, after which he criticized the corruption within Kuwait Petroleum Corp. In June, the Constitutional Court declared itself incompetent in a case brought by the National Assembly against former Finance Minister Ali Khalifah as-Sabah.

In 1995, the government – backed by a number of wealthy Kuwaiti investors – initiated the privatization of state-owned enterprises and at the same time made substantial arms purchases.

In February 1996, Amnesty International criticized the occurrence of summary executions, the use of torture and deportations without any trial. In the October elections, the government won 30 of the 50 seats in parliament. The economy grew in 1996 as a result of increases in the price of oil as well as new investments in both the construction and oil industries.

In November 1997, the emir ordered the Iraq border closed and the border guard reinforced in several places. The background was the new crisis in the Baghdad-Washington relationship. This time, Kuwait was the only Arab country to support the United States’ desire to conduct a new armed invasion of the neighboring country. 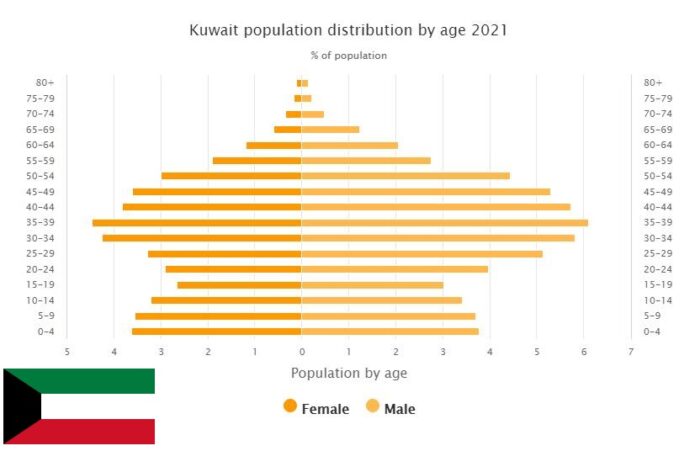