Kenya. Kenya is the third most corrupt country in the world according to the independent German organization Transparency International. The organization has examined the prevalence of bribery in 54 countries.

In January, the Kenyan opposition formed an alliance against President Daniel arap Moi and the largest party, the Kenya African National Union (KANU). The International Monetary Fund, which ceased lending to Kenya in 1995, granted a $ 216 million loan to the country in April, against the promise of increased democratization and compliance with human rights conventions.

The cooperation with Uganda and Tanzania was actualized after it ceased in 1977, and the railway to Tanzania was reopened. The government gave in to the Muslim minority’s protests against a new law and allowed the women to wear a veil on ID cards.

In the mid-1950s, the British implemented new land laws in Kenya. By plotting private land in the reserves, they wanted to create a stabilizing black middle class. Europeans who wanted to sell their land also had the opportunity to do this for full compensation. This was made possible through large loans from the World Bank, the US and the UK. Vacant land was partly set aside for small farmers, and partly sold as large estates to Africans with loan opportunities and political connections. Those who had rebelled and fought for a fair distribution of land were thus put out of play.

In addition, by banning nationwide parties and movements and by strictly dividing the country along «tribal» borders, a good breeding ground for a part-and-rule policy emerged in the 1950s. Foreign trade and industrial interests were given assurances that they could continue as before. It was a tacit assumption for loans and development assistance for the new state. In this way, the pieces fell into place. The political guarantor of the “decolonization contract” was Jomo Kenyatta. He had spent most of the 1950s in jail following a botched indictment of participation in the rebellion. He had only been released in 1961. The year before, his party, KAU, had again become legal, but now under the name KANU (Kenya African National Union). In 1962, Kenyatta was elected to the Legislative Assembly. Following the May 1963 elections, Kenya gained autonomy within the British Commonwealth. On December 12, Kenyatta was inaugurated as prime minister, and when exactly one year later the country gained full independence, he was elected its first president.

In the first decade after 1963, substantial growth in gross domestic product occurred in Kenya. Industrial and agricultural production increased. Initially, it was coffee and tea for export, as well as consumer goods for a protected and luxurious domestic market. At the same time, the established power relations were further strengthened, and the social disparities became even sharper: Agricultural development funds did not benefit the poorest farmers, more became landless, the migration to cities led to unemployment, industrial investment was based on foreign capital and technology provided few jobs, a political-administrative team of Africans bought land, shares, etc. The Kenyatta family itself became a symbol of corruption, abuse of power, large landowners and alliances with foreign companies. 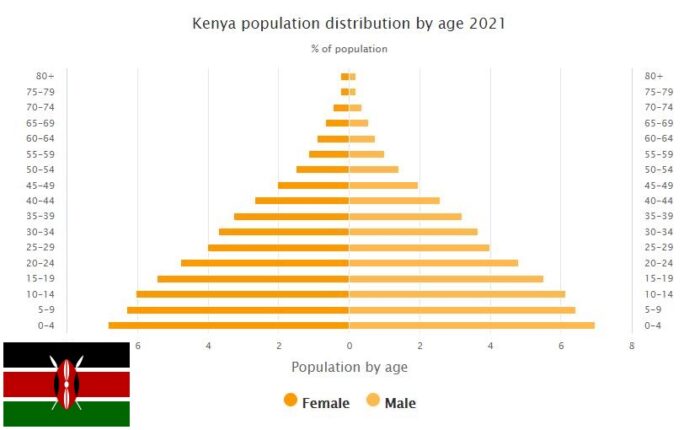