Jordan. King Hussein visited Israel in January. The visit was a confirmation of the two countries’ peace treaties from 1994 and occurred at a time when American mediator Warren Christopher was visiting Israel and Syria. Hussein has during the process served as unofficial mediator between Israel and Syria.

In February, the king presented a new government with Abd al-Karim al-Kabariti as prime minister. In March, the government won a vote of confidence in the House of Representatives regarding the government declaration. Kabariti promised economic development and an extension of cooperation with Israel.

Jordan, Palestine and Israel signed in September in Oslo under a disputed water-sharing agreement. Despite the approval, Jordan’s chief delegate Munthir Haddadin described the agreement as “a worthless document” as it did not involve a fair distribution of water resources in the Middle East.

Jordan attended the Arab summit in Cairo in June. The meeting was the first in six years. In a joint communique, the delegates called on Israeli Prime Minister Benjamin Netanyahu to resume the Middle East peace process.

On August 13, a five-day riot started in several cities, mainly al-Karak, caused by the government reducing wheat subsidies, which doubled the bread price. At least 40 people were injured in the unrest. The reduction in aid was considered necessary due to a requirement from the International Monetary Fund to reduce the budget deficit.

In September, journalist and writer Nahed Hattar was shot and killed outside the court in Amman, where he was charged with publishing a satirical drawing on Facebook that authorities believe violated Islam. The drawing was critical of IS. He had already spent a month in jail before a court allowed him to be released on bail. Jordan’s state news agency stated that the perpetrator had been arrested at the scene.

The authorities continued their practice of asking IS sympathizers, members of other armed groups, as well as journalists and opposition officials of the State Security Court. Often based on “confessions” forced by torture. Other tens of thousands were held in administrative detention on the basis of a 1954 law that allowed people to be detained for up to a year without judgment or charge.

In March 2017, Jordan shocked the world with the mass execution of 15 convicted prisoners. The executions were sharply criticized by international human rights organizations, which described them as a major step backwards. (Jordan: 15 executions ‘shocking’ says human rights group, Guardian 5/3 2017)

In May 2018, the IMF put pressure on Jordan to increase taxes and prices. The government presented a proposal that included a 5% tax increase for people in work, 20-40% on businesses and price increases on a wide range of basic goods. The proposal led to extensive protests against the government and negotiations between it and the country’s LO – without results. But after thousands of protesters defied heavily armed police in Amman in early June and demanded the resignation of the government, Prime Minister Hani al-Mulki resigned on June 4. The king replaced him with former World Bank economist Omar al-Razzaz. (Jordan: Thousands protest against IMF-backed austerity measures, Guardian 3/6 2018)

The Assad regime in Damascus carried out an offensive against rebels in southern Syria in June and July. The offensive sent hundreds of thousands in flight. They tried, among other things. to flee across the border to Jordan but was rejected by Jordanian military and border soldiers. This was yet another failure for the EU’s alleged attempt to secure refugees in the “immediate area” around Syria.

Neither the US nor the EU criticize the increasingly serious human rights violations in Jordan, but instead provide financial and military assistance. US assistance to the dictatorship in 2016 was $ 1.4 billion. US $. The EU contributed 1 billion. €. Jordan continued its participation in the Saudi-led attack war against Yemen. 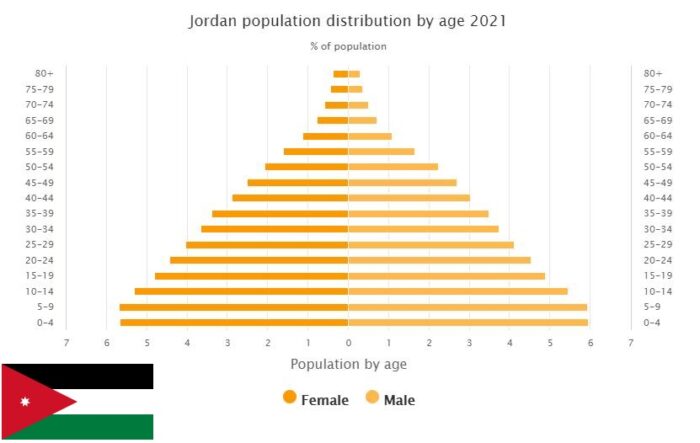