Ireland. In January, the coalition government presented a budget that improved the conditions for long-term unemployed people. Unemployment is traditionally high and reached 17.4% in the early 1990s. In October 1996 it was about 11%. In 1995, 55,000 new jobs were created, including thanks to societal contracts between employers, farmers and trade unions. The contracts guaranteed low wage increases, which also led to increased foreign investment in the country. The Republic’s economic growth in 1995 was estimated at between 7 and 9%, which can be compared with Sweden’s 2.7 and Germany’s 1.9%. The positive trend continued in 1996.

Important meat exports declined drastically due to the uproar around mad cow disease in the UK. However, beef exports increased during the autumn. In June, the Supreme Court upheld the ruling by a 1995 referendum that gave married couples the right to divorce. Divorce supporters won the vote in 1995 by the smallest possible margin – 0.5% or 9,118 votes. 80,000 couples were waiting to be separated when the law was ratified.

During the summer, the Irish government took part in the peace talks on the future of Northern Ireland. Foreign Minister Dick Spring supported Britain’s demand that the IRA’s political branch, Sinn Fein, not be allowed to participate until the ceasefire was resumed (see also Britain).

Investigative journalist Veronica Guerin was murdered on June 27 by order of a drug syndicate. The murder involved an escalation of the war between the authorities and the syndicates that increasingly use I. as a transit country for drugs. President Mary Robinson and Prime Minister John Bruton were among the approximately 1,000 funeral guests.

Ireland took over the alternate presidency of the EU Council of Ministers and more than 230 committees on 1 July.

At the end of May 1998, a referendum was held in both Ireland and Northern Ireland on the agreement. In Ireland, 95% voted in favor of the deal. A month later, the first elections for the new parliament were held, and in February 1999 the new institutions started work. Acc. it is up to the people of Northern Ireland to decide on the province’s future through a referendum: unification with Ireland or continued integration into the UK. A bomb attack in August in Omagh, Northern Ireland, killed 30 people and was about to break the peace process. But the enormous condemnation the attack triggered on both sides of the border caused the responsible group (Real-IRA, an IRA breaker group) to declare unilateral and unrestricted ceasefire.

With the deployment of the first government in Northern Ireland for 25 years in December 1999, Ireland simultaneously renounced its claim on the Northern part of the Irish island. A claim that had otherwise been written into the Constitution since Ireland’s secession from Britain. Prime Minister Bertie Ahern’s signing of this constitutional amendment coincided with the establishment of border agencies with the participation of both Northern and Southern Irish. The elimination of Sections 2 and 3 of the Constitution was considered the only way to a possible unification of the 6 Northern counties with the rest of Ireland.

Although the 6 counties continue to have a Protestant population, the demographic development favors Catholics, who in 10 years can become a majority and who in a future referendum could be decisive for the reunification of the Irish island.

Ireland has traditionally been a country from which the residents have emigrated. In particular, young people have emigrated to the UK in search of work for decades, but in recent years this trend has reversed. The country has experienced a high economic, an unemployment rate of almost 0%, and it has therefore become a major importer of skilled labor. In the period 1995-2000, 250,000 workers traveled inland from the rest of the world. The Irish government has passed legislation to promote equality, but parts of the population continue to look down on the non-Celtic tiger population. Immigration increased further in the new millennium. Especially since a number of Eastern European countries were admitted to the EU. Drastic reductions in corporate and personal taxes drew a lot of foreign capital to the background and were for some years the basis for double-digit growth rates in the country. The low taxes, on the other hand, make the country vulnerable to economic crises, where the state’s resources may prove to be sparse.

The Treaty of Nice, which was intended to change democratic structures in the EU and pave the way for the enlargement of the East, was rejected in Ireland in a referendum in June 2001, and the Treaty was therefore temporarily suspended. By a second vote in October 2002, a majority voted in favor of the Treaty after it received an annex guaranteeing Irish neutrality. However, unlike the United Kingdom, the country introduced the euro as its currency on 1 January 2002.

With a margin of just 2%, a government proposal in March 2002 was rejected. The proposal opened up that women could have an abortion if they were on the brink of suicide due to their social and economic situation.

In October 2002, members of Sinn Fein were arrested in Belfast on suspicion of espionage and attempts to obtain official terrorist information. London suspended the Northern Ireland Legislative Assembly and Government and took over direct governance of the country.

Michael McKevitt was sentenced in Dublin to 20 years in prison in August 2003. He was head of the Real IRA and responsible for the 1998 bombing of Omagh.

In the November 2003 parliamentary elections in Northern Ireland, it was especially the outer wings that emerged. The Unionist Party DUP gained 30 seats – an increase of 10 – and Sinn Fein 24 – an increase of 6. This could complicate the ongoing peace process. 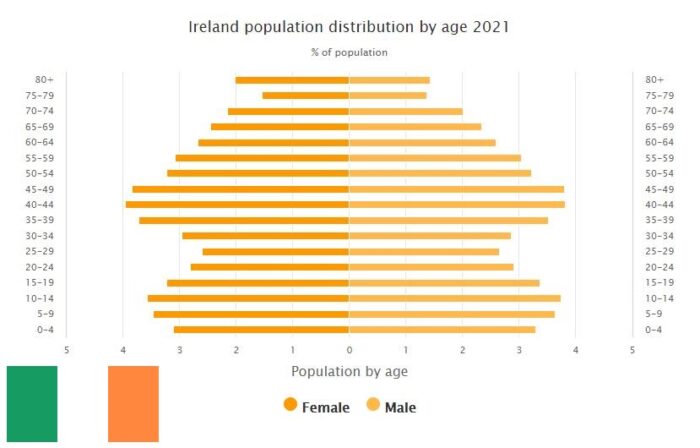