Fiji. A constitutional committee submitted a report in September intended to form the basis for a constitutional amendment, which among other things. would restore the political rights of the Indian people. They lost their rights in 1990, when the current constitution came into force.

In turn, the country’s financial problems have forced thousands of Fijians to emigrate to Aotearoa (New Zealand) in search of work. Tourism is the only source to compensate for the constant negative balance of payments, but it requires the Melanesians to be “authentic” to fulfill the quest for the exotic that Australian and New Zealand tourists are looking for. Individualism has been strengthened, common lands privatized, which should contribute to the economic strengthening of the indigenous population towards Indians. Nevertheless, the development only helped to increase the difference between country and city. While the income of the urban population in 1978 increased by 3½%, the increase in the countryside was only 0.3%.

This has stimulated the development of «racist» organizations such as the Nationalist Party which attacks the «foreign majority», even though foreigners have been in the country for five generations. Tensions were deeply affecting the Conservative government led by Kamisese Mara. His government was the only one within the British state Commonwealth that did not disconnect with the racist regimes in Rhodesia (later Zimbabwe) and South Africa and in the early 1980’s he received visits from Chilean dictator Augusto Pinochet. However, the dictator was met by extensive protest demonstrations that revealed that the progressive forces were getting stronger.

In the 1982 election, the Alliance Party only just got bigger than the opposition rival National Federation. At the April 11, 1987 elections, the Indian population majority finally prevailed. Its candidate Timoci Bavadra was inaugurated as prime minister, thus bringing down 16 years of Melanesian rule. A few days later, however, Bavadra was removed by a coup by General Sitiveni Rabuka, who legitimized his move with the need to solve the country’s ethnic problems. For observers of the country’s political life, however, the background was different. The Indian majority had to be removed from the government, and the country along with Australia and New Zealand should be prevented and signed the Treaty of Rarotonga. This treaty defined the Pacific as a nuclear-free zone and was strongly opposed by Britain and the United States.

When Bavadra was finally released, he rejected the printing of new elections that the dictator had otherwise wished at the end of 1988 together with the drafting of a new constitution. An agreement between Indian and Melanesian politicians as well as pressure from the Commonwealth apparently brought the dictatorship to an end. But Rabuka sharpened his position and, on October 6, 1987, declared the country a republic, in order to remove the head of state – the governor appointed by the British crown. In December, he resigned as head of state. Apparently for the purpose of giving the regime a more civil touch – especially vis-à-vis abroad. Penaia Ganilau was appointed President and Kamisese Mara Prime Minister. The country’s new leadership was never tested at an election.

In July 1990, a constitutional amendment inspired by apartheid was implemented. It secured the Melanesians 37 of the 70 seats in the House of Representatives and the 24 out of 30 seats in the Senate. At the same time, a 1992 referendum on the constitution was promised, but it was canceled. The following year, the UN General Assembly, Mauritius and India condemned the country’s apartheid regime. In November, the Fiji Association of Young People and Students publicly burned the new constitution and the demonstration was severely beaten.

Rabuka founded the Fiji Political Party (FPP) and during the heightened political and social tensions in 1992, a military person was appointed prime minister.

Fiji has not been able to solve its chronic balance of payments problem, since almost all processed goods and oil products must be imported and sugared, and tourism – the country’s main currency sources – cannot offset the cost. 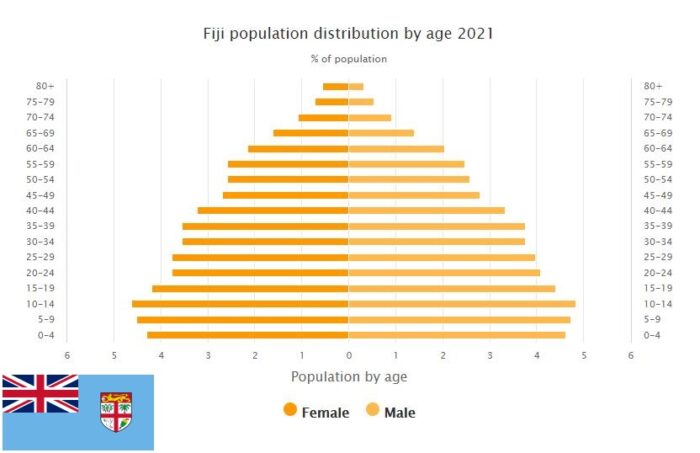